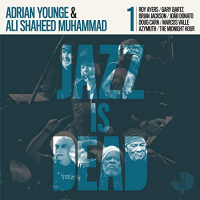 slideshow
Roy Ayers and Maceo Parker are two of my favorite jazz-soul and jazz-funk artists. Both recently released new albums. And both musicians started out as jazz players but invented new R&B forms during their careers—Ayers as a neo-soul vibraphonist and Parker as a bump-and-funk alto saxophonist. Their new albums are moody, funky and chill. Ayers is probably best known for his 1976 album Everybody Loves the Sunshine. Parker emerged in the 1960s as a saxophonist for James Brown and then in the 1970s with Parliament-Funkadelic.

Ayers's album, Jazz Is Dead 2, is out today. It's a followup to Jazz Is Dead 001, released earlier this year on the Jazz Is Dead label. Both albums were recorded in partnership with A Tribe Called Quest DJ-producer Ali Shaheed Muhammad and R&B and hip-hop composer-producer Adrian Younge, who launched the label. The music is jazz-beat driven but has a future-forward soul feel. Improvisation drifts in and out, and nothing is distinct. It's a collage of hipness but clearly nestled in the jazz family.

The compilation Jazz Is Dead 001 paired Muhammad and Younge with artists such as Ayers, Gary Bartz, Joao Donato, Doug Carn, Marcos Valle and others. Jazz Is Dead 2 is a perfect marriage between two guys lodged in the outer limits of neo-soul and Ayers, the father of this genre. Don't get worked up over the title of the albums. Jazz is very much alive. These guys are just pushing it into new territory.

Maceo Parker's new album, Soul Food: Cooking With Maceo (Funk Garage), is his first studio album in eight years. Parker unleashes a bag of funky tricks on totemic songs by Dr. John, the Meters and Allen Toussaint, as well as Aretha Franklin and Prince. Standouts include Allen Toussaint's Yes We Can Can, Gene McDaniels's Compared to What, Dr. John's Right Place, Wrong Time and Philemon Hou's Grazing in the Grass. Parker gets plenty of singing time in and wailing on his alto saxophone. A jazz-funk update.

And here's Maceo Parker's Compared to What...