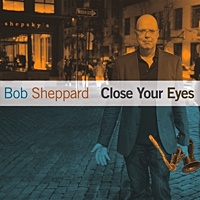 slideshow
LOS ANGELES—November 23, 2010—Bob Sheppard has long been one of the top reed players based in Southern California. Constantly in demand for record sessions, club dates, concerts, soundtracks, and an enormous amount of projects, he has the ability to sound both creative and comfortable on a variety of instruments, no matter what the setting. Now, Sheppard moves onto the next chapter in his long career, with the release of Close Your Eyes on BFM JAZZ. The album will be available everywhere on November 23, 2010.

Close Your Eyes gives Bob Sheppard an opportunity to present his own music with some of his favorite musicians. Not only is Sheppard featured on tenor and soprano (in addition to playing flute, alto flute, piccolo, clarinet and bass clarinet), but he also contributed two songs and arranged all nine performances. The music is spontaneous and swinging yet purposeful, modern and personal. It is Sheppard's most significant recording as a leader.

Close Your Eyes begins with the title cut, a veteran standard that Sheppard's inventive arrangement and restrained yet often-explosive solo make sound brand new. “Surface Tension," which has a major role for Koonse's guitar, is a well disguised reworking of “What's New." Another swing era ballad, “Goodbye" (which was Benny Goodman's closing theme song), is given an introspective yet emotional treatment by Sheppard.

The other selections include the complex yet catchy “Brain Fog," the playful “Fast Company" (a perfect showcase for Sheppard's soprano), the quietly spooky “Phantoms," “Lightness" (which is full of inner heat), Joe Henderson's “Gazelle" which sounds like the soundtrack to an African adventure, and the brooding strut “All In A Row." The musicians excel at exploring unusual song structures and creating original ideas. Sheppard's mellow tone establishes the mood for these thoughtful pieces, and his solos set a high bar for his sidemen to match.

Bob Sheppard's Close Your Eyes is a perfect match for the newly formed BFM Jazz. His playing is thoughtful and passionate, there are many subtle surprises, and the music is a perfect example of creative 21st century Jazz.

Originally an East Coaster, Sheppard started his musical journey playing professionally in and around Philadelphia at the age of sixteen. Learning to play many musical styles with every kind of band was common and expected in the fertile 70s. As a studied clarinetist, Sheppard attended college and eventually earned a Masters degree from the Eastman School of Music before ending up in Los Angeles. However, Sheppard strongly attributes his most valuable schooling to his real world apprenticeship in and around Philly.

Sheppard's unexpected move to LA proved to be fortuitous as his intuitive musicality and creative voice quickly helped him become an in demand fixture in and out of the studios. He has appeared on more than one hundred movie and television soundtracks and worked with the who's who of music.

BFM Digital is a global digital music company committed to serving the independent music community and delivering quality music, spoken word and video content to leading online retailers worldwide. Representing a diverse catalog of indie labels, artists and publishers, BFM distributes to all of the major music services including iTunes, Amazon, Rhapsody, eMusic, Napster, Walmart, Nokia and many more. With an unparalleled commitment to personalized service, BFM works closely with their content providers from around the world to ensure maximum exposure of their catalog by customizing marketing efforts and building strong relationships with BFM's digital store partners.