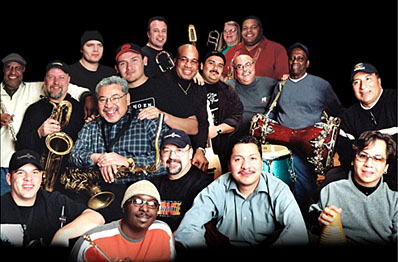 The followup up to four critically acclaimed albums by his Jazz On Latin Side All Stars, José Rizo's MONGORAMA again shines a bright light on the AfroCuban music tradition with a stellar group of West Coast artists brought together by the veteran KJazz radio host. MONGORAMA pays tribute to the great Cuban born conguero Mongo Santamaría, one of the progenitors of the Latin Jazz genre and leader of some of the most popular bands to ever play the swinging hybrid music. Revisiting the largely neglected sound of Santamaria's innovative charanga/jazz recordings of the sixties, Rizo notes, “My purpose was not to copy what Mongo did, but to honor his legacy with growth and musical evolution." The dozen new orchestrations of classic Mongo recordings and original compositions in their tradition, with rich ensemble arrangements blending virile lead vocals with the harmonic flavors of the tenor saxophone, flute and violin over a cooking Latin rhythm section, breathe new life into the sound created by Mongo more than a half a century ago.

Laws' dazzlingly luscious flute playing is featured on the opening “Bacoso," beginning the piece unaccompanied prior to the rhythm section's entrance. The title of the song, which first appeared on Mongo's Live At The Black Hawk album, roughly translated from Nigerian means “the King is not dead." As Rizo says, “With MONGORAMA, this is exactly the case. Mongo lives on!" Laws' extended solo on the descarga styled outing, arguably his best recorded one in recent years, is followed by Dayren Santamaria's exciting violin exposition, before Joey De Leon's incendiary congas are spotlighted over Hernandez's piano montuno, bringing the spirit of Mongo to the fore.

“Asi Es La Vida," an original composition by Jose Rizo and arranger Francisco Torres, recreates the charanga/jazz styling of Mongo's early sixties ensemble in a swinging setting referencing son montuno and pachanga rhythms with sonero Adonis Puentes singing the enlightened Spanish language lyric stating simply “that's the way life is," advising that one should enjoy its pleasures, deal with its downfalls, and always maintain a positive outlook on life. Special guest, Grammy Award winning conguero Poncho Sanchez is the featured soloist on the track, standing out front in the Mongo tradition, backed by Hernandez's persistent montuno and cencero Ramon Banda's energetic cowbell, while Lozano later has a turn with a fiery flute flight over the riffing violin of Dayren Santamaria and the joyous coro of Alfredo Ortiz.

Mongo's “Las Guajiras" is one of the conguero's most popular compositions, reissued many times over on various compilations since its initial appearance on the composer's classic At The Black Hawk lp. The soulful chorus introduces Puentes' powerful lead vocal praising the funky Cuban form, while Lozano solos on flute in the role played by his father on the original recording and De Leon returns on congas with a fiery outing that recalls Mongo's solidly swinging sound.

“Bluchanga," by former Santamaria pianist Joao Donato is an easy flowing Latin jazz instrumental somewhat reminiscent of Dizzy Gillespie's classic “Night In Tunisia." Justo Almario steps out front with an appealing tenor saxophone, followed by Oscar Hernandez on piano, who displays his jazz sensibility to good affect. And De Leon's congas are again showcased in the spirit of Mongo.

“Bubba Boogaloo" is Jose Rizo's tribute to his fellow KJazz colleague Bubba Jackson. Featuring the female lead vocal of Destani Wolf singing the English lyric, backed by the Spanish language coro of Adonis Puentes and Alfredo Ortiz. Alberto Salas takes over the piano chair on this soulful arrangement by co-composer Francisco Torres that features Dayren Santamaria's violin and Joey De Leon's congas on the narrative tale of one of L.A.'s most popular jazz deejays.

The beautiful bolero “Siempre En Ti" was penned by original Santamaría flautist Rolando Lozano, the father of MONGORAMA member Danilo Lozano. The son steps to the side on the piece, playing in the ensemble, but relinquishing the spotlight to the masterful Hubert Laws, who solos with stirring grace. The group's other former Mongo sideman, Justo Almario is likewise featured on the moving ballad arrangement by Oscar Hernandez who is heard at the piano.

“Guajira at the Black Hawk" by Mongo is one of the conguero's earliest pieces, pays tribute to the legendary San Francisco club where Miles Davis recorded his Friday and Saturday Night albums. First recorded on Cal Tjader's Black Orchid album when the composer was a member of the influential vibraphonist's band and more recently heard on Jerry Gonzalez and company's RumbaJazz Tribute to Chombo CD, here the guajira con cha-cha-cha features by Justo Almario's tenor and Danilo Lozano's flute, along with the congas of special guest Poncho Sanchez.

The disc closes with the swinging descarga “Tin Marin" featuring guest vocalist Freddie Crespo. The Oscar Hernandez arrangement of the Latino children's rhyme is inspired by the Cachao Cuban Jam Sessions In Miniature albums and appropriately features bassist Rene Camacho, with other solos by timbalero Ramon Banda and once again Danilo Lozano on flute.

Once well known for his composition “Afro Blue" (especially John Coltrane's incendiary interpretation of the song), as well as his hugely popular rendition of Herbie Hancock's “Watermelon Man," the opulent legacy of Mongo Santamaria has been largely overlooked in the years since his death. Jose Rizo's MONGORAMA rightly brings the legendary conguero's music back into the spotlight. Enjoying a creative career lasting nearly a half a century Mongo's inventive bands covered a remarkably broad range of music.

MONGORAMA successfully revisits the sound of his early charanga/jazz innovations, capturing it's original essence, and bringing it to the modern world with fresh vitality. One can be sure the group has much more Mongo to explore.