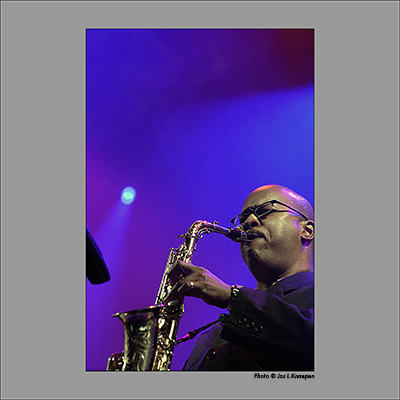 slideshow
For this week's “Music Education Monday," we've got some ideas and information for saxophonists in both video and audio form, courtesy of St. Louis native Greg Osby.

Osby, now 54 years old, attended Howard University and Berklee. Moving to NYC, in the early years of his career he performed and/or recorded with many jazz greats active in the 1980s, including Jack DeJohnette, Jim Hall, Dizzy Gillespie, Herbie Hancock, and many more.

Osby also worked closely fellow alto saxophonist Steve Coleman and other colleagues developing the concepts for what came to be known as M-BASE (which probably deserves a “Music Education Monday" post of its own one day).

More recently, after recording 13 albums as a leader for Blue Note, Osby formed his own label, Inner Circle Music, to release his recordings as well as music from others. Through the label and live performances, he also has emerged as a significant mentor to younger musicians, having already provided early professional experience in his bands for current stars such as pianist Jason Moran and drummers Eric Harland and Nasheet Waits.

Osby often does master classes in conjunction with his gigs, and after the jump, you can see an embedded video of one he recently did in Moscow, Russia. It's a long session, nearly two hours and 45 minutes, and though it's extended quite a bit by the need to translate from English to Russian, there's still a lot of material there.

After that, there's an audio-only recording of another master class he did in October of last year at Cornish College of the Arts in Seattle. (Note that the embedded SoundCloud player used to deliver the audio occasionally can be a bit glitchy; if you don't see it when you click through, try reloading the page.)

As lagniappe, there are a couple of short videos Osby recorded as part of his endorsement deal with saxophone maker P. Mauriat. In the first, he talks about intonation and the difference in sound and approach between jazz and classical saxophone; in the second, he demonstrates a special limited edition signature model alto made for him by the company.

Reflecting his interest in sharing musical information, Osby's website has a “Resources" section that includes sheet music and MIDI files for a number of his original compositions. He also shares some interesting thoughts about music in a couple of interviews, done in 1995 and 2008, with journalist Ted Panken, which are archived together on Panken's website.