The band’s righteous mix of roots music with an overseas touch of instrumental dynamics has enabled the trio to earn some widespread acclaim.
—Shane Handler, Glide Magazine 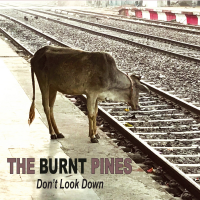 Arriving February 3, 2023, the group will pre-release three digital singles beginning with the title track November 4, followed by “The Ghost Living in My Beer" (December 2) and the radio-focus track, “Bring Out Your Book" ringing in the new year January 6th. Each of the singles will be accompanied by a story-driven music video directed by Skovmand.

With the trio’s core lineup consisting of members based in both the U.S. and Portugal (3187 miles apart), they have skillfully and beautifully demonstrated, in both logistics and craft, the challenges, both professional and deeply personal, a stunning burst of musical creativity, paving the way for Don’t Look Down.

Consisting of 11 original tracks and closing with an exuberant take on the Jethro Tull classic, “Skating Away (On the Thin Ice of the New Day),” the bulk of Don’t Look Down’s lyrics were penned by Skovmand, The Burnt Pines’ Danish-born lead singer, who was separated, and eventually divorced, during the process of writing and recording the album. Skovmand, also an accomplished filmmaker, is the father of four sons, who make memorable appearances in the official videos the singer shot.

From the opening cut, the spritely “Bring Out Your Book,” to the propulsive title track “Don’t Look Down” and fizzy Jazz-tinged Pop of “The Ghost Living in My Beer,” through tunes shaded with darker tones, such as “What Did You Come Back For?” and the heart-rending “Daytime TV,” Skovmand’s ethereal vocals and self-assured approach to his subject matter is distinguished by refreshing candor, marked throughout by, as guitarist Aaron Flanders often characterizes them, the singer’s “achingly gorgeous” vocals.

The new collection follows the 2021 release of their self-titled debut, which spent 11 weeks on the AMA/CDX Top 50 Americana Album Chart, and earned a Top 10 spot on the prestigious Roots Music Report’s Best Albums of 2021 year-end list.

Celebrated as “sublime… an album flush with a delicate folk rock glow, a quiet caress one might find while nestled by a fire on a chilly winter’s night (Goldmine), the critical and commercial success of their debut has paved the way for Don’t Look Down, the brilliant second album from the polycultural, globe-spanning outfit.

About The Burnt Pines

The Burnt Pines · Don't Look Down