Mike LeDonne: From the Heart 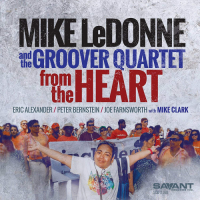 slideshow
Mike LeDonne knocks me out. He's one of the only organists around today who fully grasps the 1970s soul-jazz idiom. Back then, there were seriously groovy Hammond players such as Leon Spencer Jr., Johnny “Hammond" Smith, Dr. Lonnie Smith, Jimmy McGriff, Sonny Phillips, Charles Kynard, Charles Earland and Don Patterson, among others. All you had to do was add guys like tenor saxophonist Grover Washington, Jr., trumpeter Vigil Jones, guitarist Melvin Sparks, drummer Idris Muhammad and conga player Buddy Caldwell, and you had the hippest soulj-jazz organ combo around.

Mike's new one is From the Heart (Savant), and he's joined by tenor saxophonist Eric Alexander, guitarist Peter Bernstein, and drummers Joe Farnsworth and Mike Clark who play on different tracks. Mike calls his ensemble the Groover Quartet. The song  choices are perfect: George Duke's Someday; Mike's own From the Heart, You'll Never Know What You Mean to Me and Here Comes the Doctor; Ray Charles's Come Back Baby; Stevie Wonder's Fun Day; Sam Cooke's You Send Me and Sherman Marshall and Philip Pugh's Then Came You, recorded in 1974 by Dionne Warwick and the Spinners.

Mike LeDonne is hard-charging and romantic. He clearly loves the '70s, but instead of knocking off songs or sounds identified with others from the era, he cooks on his own terms, borrowing liberally from the decade's flavor. There are too many album highlights to get into here. One, however, is You'll Never Know What You Mean to Me, a salute to his daughter, Mary, who is multiply disabled with a rare genetic condition known as Prader-Willi Syndrome.

Anyone familiar with Mike's Facebook page knows Mike is completely devoted to Mary and is tireless in his efforts to raise money for the cause throughout benefit events and concerts. As he says in the album's liner notes, “My daughter, Mary, being born disabled, has put me deeper in touch with my heart." You can hear his heart and soul on every single track.

Note: Mike started New York's Disability Pride Parade in 2015. He is the event's founder and president/CEO. This year it will be held on July 15. The parade will travel from Madison Square Park to Union Square. To register and for more information, go here.