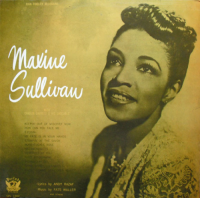 slideshow
The female jazz vocal starts with Maxine Sullivan. No knock on Ella Fitzgerald, Billie Holiday or other great vocalists of the 1930s and '40s, but they were really show-time swing singers at the time. Sullivan was first to bring a conversational intimacy to the jazz vocal that was better suited to small rooms than theater stages. She began her singing career in the mid-1930s and her first recordings were in June 1937, with Claude Thornhill. Two months later, she had one of her biggest hits, Loch Lomond, again, with Thornhill. Her voice throughout her storied career was a work of relaxed perfection and sublime beauty.

Sullivan was married four times, and exchanged vows with her fourth husband in 1950. Which helps explain why her 1950s discography is so light. Spending time at home was probably a better move for Sullivan and her family than recording and touring. A shame she didn't record much more at her peak in the 1950s, when albums would have made her a superstar, like many pop singers of the period. Also a shame she wasn't in film more. She had the most amazing smile, and the camera loved her.

Despite Sullivan's towering significance as the first modern female jazz vocalist, she's just a name to most people today. So I figured I'd provide you with 10 audio and video clips so you have a sense of her qualities and an understanding of why I rave about her.

Here's Maxine Sullivan in 1938 with Bobby Hackett on cornet singing Easy to Love...

Here's Sullivan with the Ellis Larkins Trio singing Takin' My Time in 1946. Larkins was one of the great accompanists...

Here's Sullivan singing Stompin' at the Savoy from the album A Tribute to Andy Razaf in 1956 with a pack of Leonard Feather All-Stars, including Charlie Shavers on trumpet and Dick Hyman on piano and Milt Hinton on bass...

Here's Sullivan on Art Ford's Jazz Party in 1958 singing I Can't Get Started and Ace in the Hole. That Sir Roland Hanna on piano, another brilliant accompanist, Tyree Glenn on trombone and Mary Osborne on guitar...

And here's Sullivan singing Something to Remember You By in Tokyo in 1985 with Scott Hamilton on tenor saxophone...