Attention Grammy members: For you consideration, Low Society's 'Sanctified' is on the ballot for the 2018 Grammy Awards in the American Roots category. 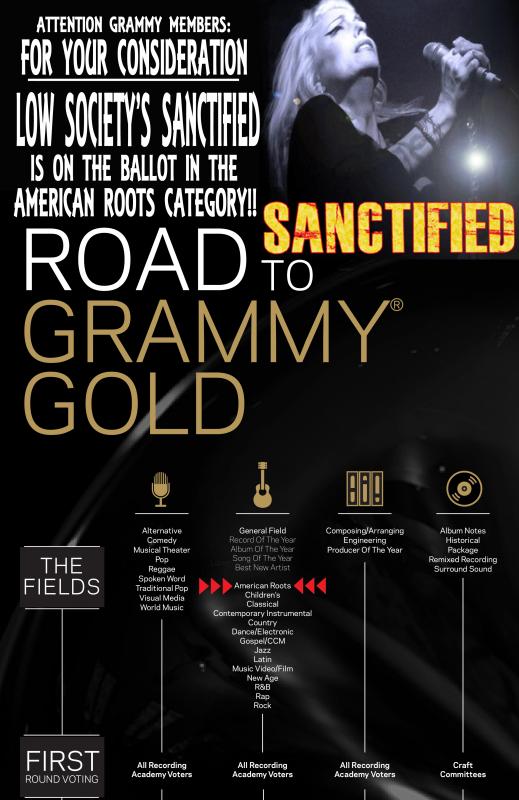 slideshow
Attention Grammy members: For you consideration, Low Society's Sanctified is on the ballot for the 2018 Grammy Awards in the American Roots category. Low Society have a long way to go to actually win it, but their latest album Sanctified has been entered for consideration. The Memphis based band's music may be way too sexy for the Academy Members, but you must admit stranger things have happened in American elections recently. First Round Voting is now open to and members are now allowed to vote online.

Their recordings and live performances have received critical acclaim world-wide, including numerous “best of “ lists. Low Society has appeared worldwide- everywhere from Clarksdale Mississippi's Juke Joint Festival (numerous times) to the prestigious 2015 Lucerne Blues Festival in Switzerland. They have placed on the Roots Music Report Top 50 Blues & Top 50 Blues-Rock Album Charts as well as the prestigious Living Blues Magazine Top 25 Radio Chart. B.B. King's Bluesville (Sirius XM) has had their music in heavy rotation since the beginning of 2015 starting with their 2nd album You Can't Keep A Good Woman Down, and now continuing with their 3rd and latest release, Sanctified.

“Low Society’s Sanctified is a Modern Blues Masterpiece. The talented team behind this album poured their heart and soul into every track, and it shows in the loving production, meaningful lyrics, and inspired performances. A classic blues fan looking to step into the world of the modern genre will not go astray with Low Society on their record shelf.” —Anna Warkentin, American Blues Scene, August 11, 2017

“The high-wire aspect of any performance or expression is the ability to push that performance or expression to the brink of bedlam and keeping there without falling prey to the bedlam. In this, Lemons has no peer. Nikides and Lemons are textbook synergy, making something eclipsing the sum of their separate parts. ”—C. Michael Bailey, All About Jazz, May 1, 2017 (read the review)

“If you ask today how to bring the blues to the future: this is clearly the way. Sanctified is one of the albums you must hear in 2017. And Low Society are, for me, one of the most recommendable bands in the arena of blues- rock.”—Nathan Nörgel, Wasser-Prawda Magazine (Germany), June 13, 2017