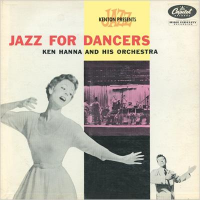 As record-industry profits surged in the mid-1950s with the introduction of the 12-inch LP and advent of fancier phonograph consoles, labels upped their recording quotas. A higher total number of albums needed to be recorded by year's end meant producers taking a few extra risks, especially in the New York and Los Angeles studios. As a result, the decade is dotted with all sorts of obscure recordings, some terrific and others not so much. Admittedly, there were plenty of dreadful attempts to merge Easy Listening with swing or suburban-Polynesian with Catskills-Latin. But there are plenty of brassy gems still out there among the scattered dinosaur bones of the big-band studio era.

One of these gems was recorded by trumpeter-arranger Ken Hanna in April and May 1955 for Capitol as part of the solid Kenton Presents series. Called Jazz for Dancers, the album's title, like many in the “for dancers" genre, hoped to put record-store buyers at ease. “For dancers" was code for brassy but still swinging and that the music was easy to dig, requiring no mental heavy lifting.

Hanna was an arranger for Kenton in the 1940s and early '50s. His charts included Begin the Beguine, How Am I to Know, Durango, September in the Rain, Where Or When and Somnambolism. In the 1950s, Hanna freelanced and presumably wound up as a studio ghostwriter for bigger-name arrangers at Capitol who found themselves inundated with LP work and TV studio charts to write.

Hanna recorded only three albums as a bandleader. In addition to Jazz for Dancers, he privately recorded Jazz Dance Date, a live broadcast in Los Angeles in 1953, and The Bright New Orchestra for Hollywood's Trend label in 1954.

As Jazz for Dancers shows, Hanna was a master of the big build and had many sophisticated section tricks up his sleeve. You can hear his big and clever brass-centric style on many of the arrangements here, including Let's Fall in Love, Shake Down and I Cover the Waterfront. Hanna died in 1982.