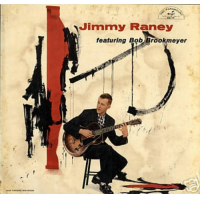 slideshow
Jimmy Raney was one of the finest East Coast jazz guitarists of the 1950s. Raney possessed a terrific sense of swing, an urgent, lyrical technique and wonderful taste on solos. Two of his best albums at the start of the 12-inch album era were Jimmy Raney in Three Attitudes and Jimmy Raney Featuring Bob Brookmeyer. Recorded for ABC-Paramount in May, June and July of 1956, and produced by Creed Taylor, who had just joined the label from Bethlehem, the two Raney albums had it all.

In Three Attitudes was an interesting concept featuring Raney teamed with three different major players. Attitude 1 was with Bob Brookmeyer, Attitude 2 was with tenor saxophonist Al Cohnand Attitude 3 was with pianist Hall Overton. On the tracks with Bob, they were backed by John Williams (p), Red Mitchell (b) and Osie Johnson (d).

Raney's most engaging band-mate was Brookmeyer, so it's no wonder that Featuring Bob Brookmeyer is the standout of the two. On Isn't It Romantic, How Long Has This Been Gong On, Get Off That Roof and Jim's Tune, Bob and Raney were backed by Dick Katz (p),Teddy Kotick (b) and Osie Johnson (d). On No Male for Me, The Flag Is Up, No One But Me and Too Late Now, Hank Jones replaced Katz.

Bob and Raney's passion for harmony and brotherly improvisation was unbeatable. They weave in and out of each other's lines on intros and then solo with gusto, inventing new melodies along the way. Raney's attacks are perfect in terms of his precise time. On the guitar, he sounds like someone banging out a novel on a typewriter. Bob also has that impeccable exactness on his powdery valve trombone. In this regard, they sound like he Nicholas Brothers in a dance routine. [Photo above, from left, Bob Brookmeyer, Jim Hall and Jimmy Raney from The Street Swingers]

If you like the sound of Raney and Bob together, here's a list of small-group albums in which they are paired...

Both albums can be found on Spotify.

JazzWax note: For my 2009 interview with Bob Brookmeyer, you'll find Part 1 here. For subsequent parts, see the link above the red date on each post.

JazzWax clips: Here's So in Love from In Three Attitudes...

And here's the full album of Featuring Bob Brookmeyer...