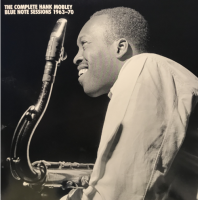 slideshow
Between 1963 and 1970, tenor saxophonist Hank Mobley recorded 12 albums' worth of hard bop. Seven were released by Blue Note during this period, while the rest wound up sidelined in the vaults. When discovered in the CD era by producer Michael Cuscuna, the lost Mobley tracks were assembled and released as five additional albums.

Now, Mosaic Records (with Michael producing) has released The Complete Hank Mobley Blue Note Sessions, 1963-70, an eight-CD box with a lush booklet and poignant notes by jazz writer and author Bob Blumenthal. In many respects, this 75-track set is the other shoe many Mobley fans have been waiting to drop.

In 1998, Mosaic released The Complete Blue Note Hank Mobley Fifties Sessions. That six-CD set is now out of print and selling online for around $200. Though all of the Mobley albums on the new box have been released as individual CDs, several have been hard to find or were in need of fresh mastering.

In giving the albums between 1963 and '70 a new listen, I think it's fair to say that Mobley's Blue Note recordings during this period were nearly on par with the Horace Silver Quintet for spunk and compositional excellence. His writing was consistently sharp and distinct, and his arrangements were simultaneously optimistic and mournful in tone—a hip duality of sighing moods and flavors.

Which begs the question: why did Mosaic choose 1963 as the starting point for the artist's second phase rather than pick up in 1960, where the last box left off? Left behind were Soul Station, Roll Call, Workout and Another Workout. Michael says Mosaic skipped them for several reasons: the already large boxed set would have required another two CDs, the albums are still in print and most people already have them in their collections.

From a narrative and stylistic standpoint, 1963 is a valid demarcation. The year was a comeback of sorts for Mobley. In 1961, he was hired to replace John Coltrane in Miles Davis's quintet. But while the idea seemed to be brilliant, it wasn't. Mobley and Davis didn't click, and Mobley was ruthlessly criticized by Davis. So Mobley left the group in 1962. When he returned to the recording studio in '63 as a leader, his attack was more forceful and dynamic, leaving one to wonder whether his brief period with Davis had altered his feel.

If there is a story to be told here over these seven years, it's about a vibrant tenor saxophonist finding his way as the music business began to close in like a vise. On one side was John Coltrane's muscular flamboyance. On the other was soul-jazz and Latin-soul rising in popularity. Standing out wasn't easy. Many other tenor saxophonists ran aground, either joining the Coltrane camp, playing in Las Vegas and on cruises, quitting the business to teach, or continuing to record exhausted material as if the calendar still read 1959.

What's remarkable about Mobley during these seven years is that he remained unique. His original compositions were, for the most part, shrewd and sophisticated. Listen to the ballads My Sin from The Turnaround! and No More Goodbyes from Reach Out! He also advanced hard bop with fresh energy and elan. Dig Pat 'n Chat (from The Turnaround!) and Third Time Around (on A Caddy for Daddy).

Even the bossa-boogaloo bag Blue Note became famous for pioneering during these years were crafty and complex in Mobley's hands, such as The Turnaround!'s title track and The Dip from Dippin', to name just two. On A Caddy for Daddy, Mobley applied a new cool that was likely influenced by Wayne Shorter. You can hear this on songs such as Ace Deuce Trey and An Aperitif.

By his last album—The Flip, recorded in 1969 and released a year later—Mobley had grown noticeably weary. Many of the tracks featured dull phrases or were pocked by repetitive soul riffs. Lung problems forced Mobley to retire from playing in the mid-1970s. He did perform again in New York in late 1985 and early '86 but died of pneumonia in May of that year.

The set's sound is rich and vivid. The box's material was mastered from high-resolution files of the original analog masters by Malcolm Addey, using 24-bit technology.

And here's the complete Turnaround!...