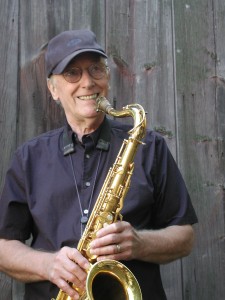 Soon after I started this blog in 2007, I interviewed saxophonist Hal McKusick at length. Hal appeared on dozens of my favorite albums and his heart-touching tone was unmistakable. In the years that followed our initial conversation, we spoke every few weeks by phone. Hal was always generous with answers to my questions and hugely encouraging. He also provided me with a great education, steering me to incredible recordings and insights into the players. Even in 2007, Hal immediately understood the value of a jazz blog dedicated to those who made the music but may have been overlooked or forgotten. He loved that I was preserving musicians' words and stories for future generations.

Hal died in 2012, and there isn't a week that goes by that I don't think about him and listen to his recordings. I have nearly all of them, so imagine my surprise when I received an email from saxophonist John Ludlow, who hipped me to an obscure 45 that Hal recorded for the Glory label in late 1958.

On the A-side of the 45 is an instrumental cover of Ambrose (Part 5), a novelty pop song by Linda Laurie released in 1959. It was written by Linda Gertz, Wes McWain, Lou Sprung—Linda Gertz being Linda Leslie, the song's singer. Hal's side was called Ambrose (Just Keep Walking)—the parenthetical phrase taken from the song's lyrics.

Interestingly, Laurie's Ambrose and Hal's were both recorded for the Glory label (Laurie's single was #45-290 while Hal's was #45-292). Clearly, Hal was brought in to create an R&B version of the song. His Ambrose opens with a gravelly voice saying, “Just keep walkin'." The rest is a catchy melody with a walking bass line and a sauntering feel that lasts just 2:31.

On the B-side is You're Everywhere, by Robert Nemiroff and Burt D'Lugoff who are credited on the label as Robert Barron and Burt Long, their pseudonyms.You're Everywhere is an addictive ballad, providing Hal with a seamless melody on which to improvise. Sadly, the single runs just 2:34. Hal put together a trio behind his alto sax, and some discographies list Milt Hinton as the bassist. That's it for the personnel.

But the piano's chord voicings on the intro and solo make me think it's Bill Evans in his Miles Davis accompanist phase. Listen to the intro, which is pure Jazz at the Plaza, an album Evans recorded with Davis in September of that year. Hal was close with Evans in 1958 and recorded with the pianist around this time on George Russell's New York, N.Y. The drums are less obvious.

Glory Records was founded in 1955 by Phil Rose, a former executive of Derby Records and Coral Records. Since Hal recorded quite a bit for Decca and Coral, I'm assuming Rose was a friend who asked him to do the date. Soon after the single was released in 1959, the label folded. As for Robert Barron and Burt Long, they had written other songs for Glory prior to You're Everywhere—notably Cindy, Oh Cindy, by Martin, Vince & The Tarriers in 1956, and Linda Laurie's Oh, What a Lover!

I'm hard-pressed to think of another song that more perfectly evokes Hal's grace and tenderness than You're Everywhere. I just wish I could pick up the phone and talk to him about it for a half hour. I miss Hal.

Here's the Hal McKusick Quartet on You're Everywhere...