The magical flutist, Hadar Noiberg, and her trio captivated the audience... She formed her own original style through distinctive rhythms and melodies. --Das Nuue Musikzietung magazine. 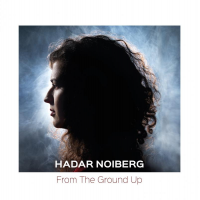 slideshow
Dot Time Records recently signed the exciting flutist Hadar Noiberg to their growing roster of world-class artists. Most recently, Noiberg was asked to perform at the prestigious 2016 JazzAhead Festival in Bremen, Germany this coming April as part of her European tour.

You can make your reservation now for her upcoming regional January 2016 performance dates:

Hadar Noiberg (ASCAP award winner) has made a name for herself as one of the most innovative, passionate and groundbreaking flutists-composers in the Jazz and World Music scene worldwide. From the Ground Up is Hadar Noiberg's 2nd album as a band leader and features drummer Allison Miller, (Ani DiFranco, Dr. Lonnie Smith, Natalie Merchant), bassist Haggai Cohen Milo and guest artists, clarinetist Anat Cohen and guitarist Yotam Silberstein.

IN THE WORDS OF THE ARTIST

From the Ground Up is my second album as a band leader, but in a way I feel like it's my first.

What I connect to most in music are touching melodies that captivate me, a lot of groove that will make me move, passion and sincerity in the playing and the freedom to make the music different each time its being played. I'm proud to say that this album and this band have all of the above.

Some might consider the flute to be an instrument that's been looked down upon by the jazz world. I believe the flute is a very powerful instrument. It is a spiritual leader in the Middle Eastern and Far Eastern cultures and I believe I bring forth that energy in this album and in this trio.

The special instrumentation of flute, bass and drums, allows me to have lots of space and freedom to express myself and also create layers of flutes with the help of effects and loops. In that way the flute can be everything - playing the melody, emphasizing the groove and rhythm of the song and creating its harmony.