Guitarist Ricardo Grilli Debuts Oct. 15 With "If On A Winter's Night A Traveler" 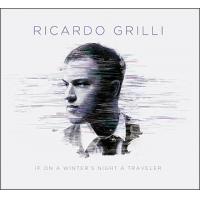 slideshow
In the seven years since leaving his native São Paulo for Boston and then New York, guitarist Ricardo Grilli has found his voice as a distinctive jazz player and composer. His glowing debut album, If on a Winter’s Night a Traveler, which his Dark House label will release on October 15, chronicles that journey in rich detail.

Grilli’s restless creativity is manifested in his love of odd meters, offbeat structures, and themes that keep circling back on themselves like the narrative lines in the Italo Calvino novel from which Traveler takes its name. The guitarist, now 27, began writing songs out of necessity while studying at the Berklee College of Music in Boston. “I figured the best way to get people to play with me was to write interesting music they would want to play,” he says. “And that worked.”

Among the Berklee classmates with whom he forged an especially tight bond was the pianist Christian Li, who’s featured on Traveler along with saxophonist Gustavo D’Amico, a friend of Grilli’s from Brazil, and the bass-drum team of Jared Henderson and Lee Fish, whom Grilli met at a Boston club.

As a composer, Grilli uses a kind of free association method, starting out with a word or phrase and seeing where it will take him musically. The germ for the wistful “Revolver” was a magazine interview with R&B singer John Legend about his album, Evolver. That led Grilli to ruminate on the word “revolver” and the mechanism of “a thing that turns.” In his song, he says, “I made the chords go round almost like Bill Evans did on ‘Time Remembered.’” (Revolver also is the title of his favorite Beatles album.)

“Riga,” a coolly propulsive tune featuring D’Amico on soprano saxophone, was named after the Baltic city, where Grilli once attended a conference as a student representative. “The Great Escape,” boasting one of Grilli’s most fluid, entrancing solos and sparkling electric piano by Li, is a nod to the Steve McQueen classic. The note-tripping, modal-style “Mark I” (a play on Mach 1) was written for tenor saxophonist Mark Turner, whose 2001 album, Dharma Days, is one of Grilli’s all-time favorites. That album features Rosenwinkel, for whom Grilli wrote the alternately earthy and lighter-than-air “The Abstract.”

Ricardo Grilli De Castro grew up in a musical family and first picked up a guitar—his grandfather’s—at the age of four. He actually was set to attend law school when he decided to study music instead. “I had a great need to understand what was behind it,” he says. He enrolled in the prestigious Souza Lima Conservatory & College of Music, completing half of his undergraduate studies there; after winning a special scholarship, he finished his degree at Berklee, a sister school of the conservatory.

When he arrived at Berklee, Grilli says, he was less polished than most of the guitar students there, without any kind of sound he could call his own. He spent countless hours listening to and transcribing Wes Montgomery’s recordings, focusing as much on the rhythmic component of the music as the melodic. “In Brazilian music, we really try to play with a straight rhythmic feel through songs,” he says. “There’s no real swinging quality.”

Unlike many Berklee students from outside the U.S. who played mainly with classmates from the same part of the world, Grilli played almost exclusively with kids from the States. When the original samba beat of “Riga” proved tricky to his American bandmates, he changed the rhythms to play to their strengths and acquire a more American sound. Mentored by such instructors as Mick Goodrick, Bruce Bartlett, and Hal Crook, he developed a more personal style. After graduating from Berklee in 2011, he headed to New York to get his master’s degree in jazz studies at NYU.

In the Big Apple, Grilli has enjoyed the best of two worlds. In academia, he has studied with the likes of guitar great John Scofield, who impressed him with his refusal to stand still musically. And in clubland, Grilli has performed with acclaimed stars including Chris Potter, who joined the NYU Ensemble at the Blue Note’s Sunday jazz brunch, as well as bands of his own.