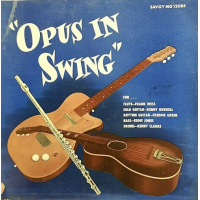 One of my favorites is Opus in Swing. Recorded in June 1956, the album features Frank Wess on flute, Kenny Burrell and Freddie Green on guitars, Eddie Jones on bass and Kenny Clarke on drums. Of course, during these years, Wess was a member of the reed section in Count Basie's New Testament band. When the band had down time or was parked at Birdland in New York for an extended period, Wess had an opportunity to record as a leader for producer Ozzie Cadena at Savoy.

The songs on this chamber-jazz album are Kansas City Side by Wess, Southern Exposure by Burrell, the standard Over the Rainbow, and Wess's Wess Side and East Wind. Clarke keeps solid rhythm here on drums, with strong bass lines by Jones. Basie-ite Green plays rhythm guitar throughout, replacing the piano with solid ching-ching-ching chords behind Wess and Burrell.

Wess on flute and Burrell on lead guitar are unbeatable. Wess flies around warmly like a butterfly while Burrell serves as the net. On up-tempo numbers, Wess takes off with a swinging bop feel, tearing along in a happy-go-lucky zig-zag. Burrell is tasteful throughout, whether strumming coolly voiced chords or picking away on lines with a rich, deep sound. The album remains as fresh as a breeze in May.

All of these Wess sessions for Savoy are uniformly intoxicating. They're hip, spry and deliciously composed and arranged. For those unaware, Wess was one of the fathers of the solo jazz flute. His first recording on the instrument was in 1954. Of course, the flute popped up in bands previously. For example, Lee Konitz played the flute in Claude Thornhill's band in 1947 and Tony Scott appeared with Duke Ellngton in 1953. Herbie Mann played with Mat Mathews that same year, and Yusef Lateef recorded on flute circa 1950. But Wess pioneered the swinging solo feel with a beckoning tone. [Photo above of Frank Wess]

Blue Note and Prestige were great jazz labels in the 1950s, but we have to give Cadena and Savoy a great deal of credit for recording exceptional jazz as well.