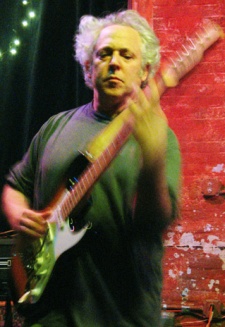 slideshow
by Tom Johnson David Torn's Tripping Over God is an album that has defied description since the day I bought it in 1995. With only a vague knowledge of the man as a member of David Sylvian's band for the Secrets Of The Beehive album, I happened upon a listening station at the local Tower Records offering the chance to hear the album. Mesmerised within a moment of pressing play, I quickly grabbed a copy. I couldn’t possibly be the only other person who would want — no, need — this kind of music in my life, could I?

Torn crafts mood out of squeals of distortion and looped noises he collects with his guitar’s pickups, then weaves swirling lines of melody on top of the result, often adding additional bits to his loops as he plays.

In a way, he shares many characteristics with other atmospheric artists such as Robert Fripp of King Crimson and Michael Brook, he of the Infinite Guitar heard on many U2 songs. (The instrument was given by Brook to U2′s The Edge and consequently used on many later 1980s hits. Brook built the Infinite Guitar himself, which allows the player to create unending notes if he wishes, or to loop and echo what’s being played in real-time — a sound that The Edge used to such memorable effect, but now replicates with a bevy of stomp-boxes and electronics. The Infinite Guitar is valuable, touchy beast that deserves better treatment than touring allows.) Musicians like this see the guitar not as an end, but the means to an end beyond what traditional guitarist attempt.

What results is nearly indescribable in beauty and delicacy, but is utterly alien in origin. There truly is little else in the natural world that can reflect or describe the sounds David Torn is able to concoct with a guitar, but very little of it truly sounds like the guitar as most know it. Perhaps the best description is the soundtrack of a foreign film from 75 years in the future, recorded in a place where computerized-sheen isn’t an option.

If you don’t think you’ve ever heard David Torn before, think again. It’s unlikely that you haven’t seen something that has featured the score work of Carter Burwell (“Being John Malkovich,” “Fargo,” “Three Kings,” and even more mainstream works like “Conspiracy Theory,” among many, many others), who often employs Torn for other-worldly sounds. You have heard him somewhere along the way — just not on the radio.

Here, Torn ably mixes ethnic instruments he himself plays with traditional rock instruments, which he also plays himself — drum programming, guitar, bass, harmonica, percussion; aside from one song on which his son contributes “noise and his fretless bass.” The result is something that sounds distinctly unusual, but cannot be traced to any one culture. Rock elements combine with third world elements in a way that doesn’t sound as if Torn is simply attempting to sound wordly. While the album contains passages that resemble “solos,” very little of them truly feel like solos and simply serve to advance the song. Nothing is meant to show off Torn’s skill as a guitarist.

The pieces grow from bits, as if he’s gathering ideas as he plays (and, from reading interviews, that may be exactly what he does) and his structure rarely follows what could be considered a traditional verse-chorus-verse pattern. Those elements are there. He may just not use them in that order, and sometimes not really at all. Rhythm may be supplied by drum machines he deftly programs to follow his wandering, or it may come in the form of clicks and random noises he loops as he plays. The sound is gritty and yet appealing, and never once does any of his ethnic meandering venture near the clean, sanitary blandness of new-age music.

It may be a challenge at first for the uninitiated, but so pleasantly complex is David Torn’s music that it never fails to intrigue and offer up something new.