For The Love Of The Music: The Club 47 Folk Revival Documentary 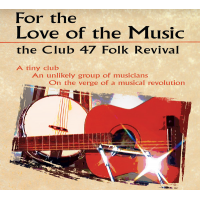 Includes Audio Of Two Unreleased Bob Dylan Performances, “Talkin’ World War 3 Blues” and “With God on Our Side” And A Dylan With Eric von Schmidt Version Of “Glory, Glory”

Boston, MA: A new documentary celebrating the roots of the Cambridge, Massachusetts folk music scene will premiere at the 2012 Boston International Film Festival on Tuesday April 17, 2012.

“FOR THE LOVE OF THE MUSIC: THE CLUB 47 FOLK REVIVAL” centers around Club 47, the iconic Harvard Square coffeehouse, now known as Club Passim, where Joan Baez, Tom Rush, Taj Mahal, Judy Collins and many others got their starts in the early years of the folk revival from 1958 - 1968.

“The Club 47 scene was unique,” said the film’s executive producer and co-director Todd Kwait. “Unlike the Greenwich Village folk scene that was developing at about the same time in New York, Club 47 wasn’t a bar run by a club owner but rather a non-profit coffee house. That made for more of free-flowing atmosphere with more collaboration between the club and the artists.”

“Those ten years were like a Camelot Moment," added co-producer/co-director Rob Stegman. “This was an unusual group of extraordinarily talented musicians, coming together almost by chance, yet launching a revolution in American music that inspired generations of artists and music lovers."

For the Love of the Music will premiere at the Boston International Film Festival on April 17, 2012 6pm at the Loews Theatre /AMC Boston Common. The film will also screen at the SENE Film, Music and Arts Festival at Brooklyn Coffee and Tea House in Providence, RI on Friday April 13, 6:00 PM EST.

The Boston International Film Festival was created to celebrate the art of filmmaking and to honor the filmmakers who make it all possible. This is a festival dedicated to rewarding artists for their individual talents and for their creative expression through the medium of film. The festival strives to bring together in Boston local, national and international filmmakers by promoting the world’s most artistic and creative independent and experimental films. http://www.bifilmfestival.com

Based in Rhode Island, SENE seeks to involve audiences in a full range of cultural opportunities, combining film, music and art into year-round events designed to cross- promote the works of filmmakers, musicians and artists to new audiences.

The festival is produced by Southeast New England Film, Music and Arts, a non-profit 501(c)(3) tax-exempt organization. Donations to SENE are tax-deductible as allowed by law. The festival is 100% volunteer run. All donations go directly to producing the festival's programs and events and supporting the work of filmmakers, musicians, poets and artists.

NEFMA preserves, promotes and documents the ongoing cultural legacy of folk music and its connections to New England through education, collaboration and entertainment.