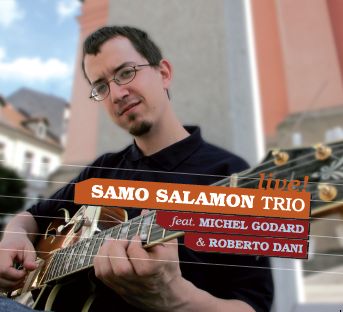 slideshow
All About Jazz members are invited to enter the “Samo Salamon - Live!“ giveaway contest starting today. We'll select FIVE winners at the conclusion of the contest on March 26th.

(Following Samo Salamon at AAJ automatically enters you in the contest.)

About Samo Salamon and Live!

Samo Salamon is one of the most talented young guitarists and composers to emerge on today's jazz scene. He has toured and recorded 10 albums as a leader for such labels as Fresh Sound New Talent and Splasch Records with players such as John Scofield, Tim Berne, Paul McCandless, Mark Turner, Michel Godard, Drew Gress, Tony Malaby, Mark Helias, Tom Rainey, Dave Binney, Josh Roseman, John Hebert, Donny McCaslin and many others.

The new album, Live!, by the Samo Salamon Trio featuring Michel Godard & Roberto Dani, is Salamon's 10th CD as a leader/co-leader. Live! (Samo Records, 2010) features 10 original compositions and includes a great band, with one of the best tuba players in the world- Michel Godard (France), Samo Salamon on guitar and one of the best European drummers- Roberto Dani (Italy). The album is available everywhere on the internet, including Amazon, emusic and iTunes.

What critics are saying about Samo Salamon:

“The guitarist appears again to be one of the most intriguing musicians around and who knows what he has in store for us." - Alain Drouot, Allmusic

“One of the hottest 10 new guitarists in the world." - Guitar Player

“He attacks thematic patterns from every angle, making dramatic variations in phrase length and tempo from bar to bar." - Peter Margasak, Downbeat