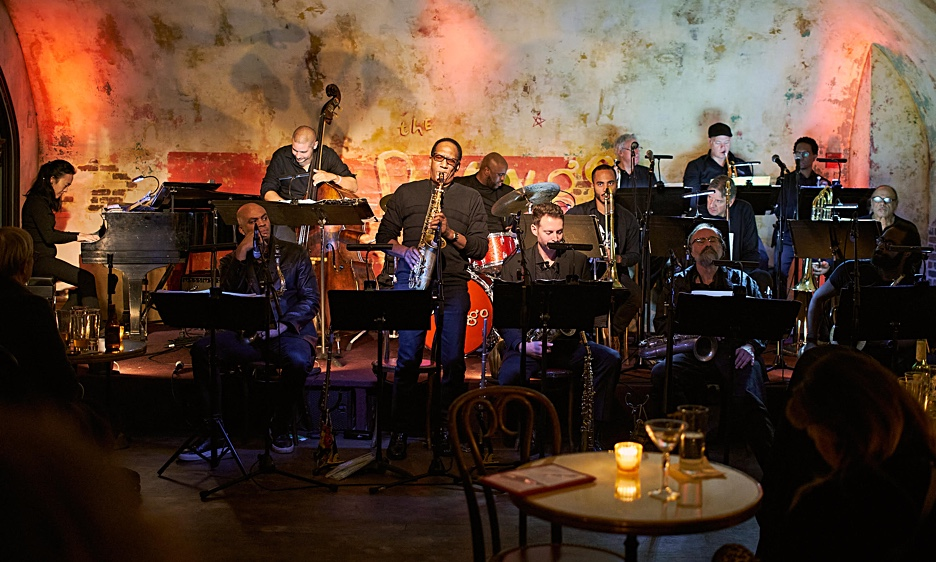 The jazz repertory event of the season... [the Big Band] is digging into the repertoire of Charles Mingus, playing old and new arrangements that capture the best parts of the Mingus legacy: the muscle, the affection for history, the willingness to take chances, the guts and soulfulness.
—The New York Times

“We are thrilled to have this opportunity to revive the vital weekly celebration of Mingus and bring back what stood for years as one of the highlights of New York’s jazz scene,” said Ken Fowser, music director of The Django. “It is an honor to provide a platform where Mingus’s music and legacy can continue to thrive. We look forward to welcoming the vibrant musicians, Mingus’s spirit and repertoire, and their loyal fans to our club each and every week for the foreseeable future.” Boris Kozlov, the band’s bassist and music director agrees: “We are so lucky to be sharing Mingus’s music and playing live at The Django. We are thrilled to reconnect with our audience in this beautiful venue as we gear up for Mingus’s centennial celebration in April 2022.”

Comprised of a revolving family of brilliant players, the 14-piece Mingus Big Band has a long history as a stronghold of the New York jazz community. It performed Thursday nights from 1991 to 2004 at Fez under Time Cafe in New York City, and later weekly at Joe’s Pub and Iridium. More recently Mingus Mondays were celebrated for nearly 12 years at Jazz Standard, halted by the COVID-19 pandemic and the club’s December 2020 closing. The popular series was hailed as “probably the best in the entire world” (LucidCulture), “the one not to miss” (TravelRamblr), and “a great way to spend an evening any time” (KYOU Radio).

Renowned as one of the greatest composers of 20th century music, Charles Mingus (1922-79) wrote the second-largest body of work, after Ellington, of any American composer. His archives were acquired by the Library of Congress — a first for jazz, and a first for an African-American composer. Mingus’s music has been kept alive through the efforts of his widow Sue Mingus, who has long championed his work through performance, publishing, education (including the Annual Charles Mingus Festival for High School musicians), and archival efforts; working with Mingus Alumni such as Sy Johnson and Jack Walrath, and instrumentalists led by Mingus Band Leaders Alex Foster and Boris Kozlov. In the history of American music, Mingus made signature statements in support of the civil rights movement through his compositions such as the protest tune, “Fables of Faubus,” which spoke to the 1959 event in which the governor of Arkansas prevented the integration of a local high school. According to All About Jazz, “Mingus’s creations were radically, almost shockingly original when first heard.” The ever- growing audiences around the world speaks to the unerring timelessness of Mingus Music.

“Charles Mingus’ music contains multitudes. His compositions are among the most personal and most varied in music, sweeping across the country gathering in their wake the sounds of Dixieland, bebop, Latin rhythms, swing, romantic ballads, west coast jazz, European classical forms, African folklore, all of it rich with melody, all of it steeped in the blues, ranging from the most tumultuous emotions to the deepest privacy of the soul.” —Sue Mingus

For over 30 years, Mingus Big Band celebrates the music of the composer and bassist, Charles Mingus, who died in 1979. Founded by Sue Mingus, the 14-piece Mingus Big Band tours extensively in the United States and abroad, and has 11 recordings to its credit, six of which have been nominated for Grammy Awards, including “Live at Jazz Standard” which won the Grammy for Best Large Jazz Ensemble Album in 2011. Their much-anticipated release is scheduled for 2022.

“It’s irresistible really, a clarion call to witness one of the resounding and joyous voices of American jazz.” —Riveting Riffs

“The Mingus Big Band is a wonder and an anomaly. They are an important part of the current jazz scene and a constant reminder that... big band jazz...is a powerful art form and means of expression....an astonishingly telepathic ensemble." —NY Daily News

“The best jazz orchestra in the world bears the name of the Mingus Big Band... a remarkable high standard of musicianship, energy and consistency.” —The Washington Post

“The Mingus Big Band- musician for musician- is one of the most spirited and technically gifted bands in the country." —Seattle Examiner

Located in the cellar of The Roxy Hotel, The Django is downtown Manhattan’s premier jazz club. Created by GrandLife Hotel’s Tony Fant, The Django is modeled after the eponymous musician’s boites of Paris. The Django is home to the weekly Mingus Big Band residency, monthly Mark Whitfield residency, and some of today’s top jazz artists and emerging musicians.

Health + Safety Protocols: The Django regularly updates its COVID protocols and procedures based on CDC, federal, state, city and other scientific data. At this time, COVID vaccination cards are required.

The Django
2 Avenue of the Americas
(Cellar Level at The Roxy Hotel)
New York, NY