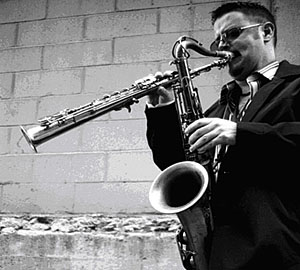 You want some funk with that jazz? Then don't hesitate to pick up Mahoney's Way (Roberts Music Group) by Dave Mullen & Butta. Mullen's music and saxworks is reminiscent of mid to late 80's Prince, or more specifically the sax work of Eric Leeds. He is able to play a bit of quiet storm when he wants, but seems to love getting down and playing for the fun of it, whether it's a mid-tempo ballad or something to move a dance floor, as is the case with Latin/hip-hop tinged “Squid" (which could easily find its way onto a Groove Collective release. The ratio of instrumentals to vocal tracks are split right in the middle, and while Mullen's take on Stevie Wonder's “As" is quite good, it is “Lost Souls" that is the best vocal track on the CD. As with “As", “Lost Souls" features the vocals of Lisala Beatty, whose voice reminds me of all of the comforts of home. Here, Mullen moves to the background briefly but compliments Beatty's voice in fine form.