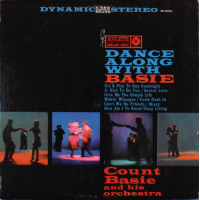 slideshow
You won't find one of my favorite Thad Jones albums listed under his name. It's Dance Along With Basie, recorded for Roulette at the tail end of the 1950s. Cut over four sessions during the December holiday season in 1959, the album features mostly mid-tempo, swinging arrangements of standards. They're all strikes and perfect for a twirl around the dance floor.

Despite the updated swing of Basie's New Testament band of the 1950s, the band was always first and foremost a dance band. His first Kansas City band, in 1936 (after leading Benny Moten's ghost band), was the nine-piece Barons of Rhythm. Basie moved to Chicago in the fall for an extended engagement at the Grand Terrace Ballroom and to record for John Hammond at Columbia. The magic of early Basie was the rhythm section and a modern, cooler sense of swing. First and foremost, Basie's bands have always been dance bands first, with soloists and convivial sectional added.

Dance Along With Basie was probably aimed at buyers who'd put it on at home and dance in the living room. I'm sure it also was designed to show off the new stereo format, with Harry “Sweets" Edison and the horns coming through the right speaker and the reeds and rhythm section sailing away in the left. That was the mission of the Basie band, no matter who was arranging—Neal Hefty, Ernie Wilkins, Thad Jones or Quincy Jones, among others. It was entertaining dance music for people who didn't necessarily dance. Or did.

Standout arrangements by Jones are Give Me the Simple Life, It's a Pity to Say Goodnight, (Once I Had a) Secret Love and Misty (with Frank Wess and Charlie Fowlkes soloing on flute and baritone saxopone). But the rest of the fare are hardly slouches. The charts may not be as adventurous as Jones's pen work in the 1960s and '70s but they breathe well, have great pacing and sound solidly 1959.