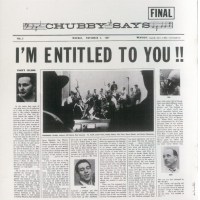 slideshow
One of the hippest big-band albums of 1957 was Chubby Jackson's I'm Entitled to You. And that's saying something, since virtually everything Jackson recorded was with-it and explosive. Jackson not only was a pistol, he also was a brilliant bassist and band leader who attracted the most fiery arrangers and best players. From my conversations with the late Hal McKusick, much of Jackson's appeal had to do with his jolly sense of humor. He managed to combine brilliant artistic judgment and wiggy whimsy that endeared him to the best of the best. In other words, for highly proficient musicians, playing with Chubby was fun.

So how hip is I'm Entitled to You? Man, where do I begin? Let's start with the personnel. The band featured six trumpets, and the sections were seasoned with killers—bass trumpter Cy Touff, trombonist Bill Harris, tenor saxophonist Sandy Mosse and drummer Don Lamond. Hip reedy vocalist Jackie Paris also is on the session for three songs.

As for the album's arrangers, Manny Albam handled the Paris tracks (I'm Entitled to You, Big Fat Nothing and Do Me Sum'n), Al Cohn charted New York to Chicago, Slap That Bass and Mister Duff, Bob Brookmeyer arranged Gus's Blues, and Bill MacRae scored Move My Way, Yesterday Is Here and To Seek. All of them are monster charts that sound ahead of their time and kick like a mule.

There are knockout solos by Bill Harris on To Seek, New York to Chicago, Move My Way and Yesterday Is Here. Don Lamond is off the charts on the drums. His snap and punch were remarkable. And then there's Jackie Paris. He's as loose as can be and the lyrics to I'm Entitled to You are wild ("I'm entitled to you, you're so deserving / So how did you guess that my name is Irving"). Not to mention Jackson, the hippest of the hip bassists. By the way, Chubby wrote the music for all of the songs except the Gershwins' Slap That Bass and the lyrics to many of the others. Now that's hip and hep. [Photo above of Bill Harris by William P. Gottlieb]

And here's Move My Way, with a cryin' 'bone solo by Bill Harris. Dig how the baritone saxophone plays off the trumpet section...

JazzWax video: One of the finest jazz documentaries ever made is 'Tis Autumn: The Search for Jackie Paris (2006), directed by Raymond De Felitta. It's a masterpiece on every level. I re-watched the film for the fifth time last week and it still chokes me up. You'll find the DVD here.