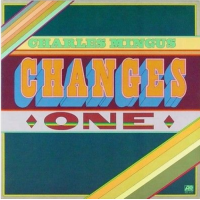 One of my favorite Charles Mingus albums is Changes One, recorded for Atlantic Records at the tail end of December 1974. There something about the recording that exceeds even Mingus's high composing standards and exotic vision. The album is moody, brooding and reminds me of New York in the mid-1970s more than any other. Yesterday, when I re-listened to the album and heard Remember Rockefeller at Attica, Sue's Changes, Devil's Blues and Duke Ellington's Sound of Love, I was transported back to a financially challenged city that was crumbling, forgotten by the Gerald Ford White House, and adrift culturally. But it's not Manhattan nostalgia that draws me to Changes One. It's the album's shifting moods, romanticism and quality of the playing.

The musicians on the session were Jack Walrath (tp), George Adams (ts,vcl,arr), Don Pullen (p), Charles Mingus (b) and Dannie Richmond (d). In re-reading Nat Hentoff's liner notes, I discovered that Changes One (and Changes Two, from the same session) were Mingus favorites as well. “They're among the best records I've made," Mingus told Nat. The reason, Mingus said, was “because this band has been together longer than most of the bands I've had."

The album opens with Remember Rockefeller at Attica, which had another title prior to its recording. Mingus's changed the name to make a political statement about New York State Governor Nelson Rockefeller, who ordered the state police to retake the Attica Correctional Facility in September 1971 following the prison's seizing by inmates to change conditions. The result of the storming by state posice resulted in the shooting deaths of 10 prison guards and 33 inmates and other prison workers. The event raised the stakes in the civil rights movement, ushering in decade of radicalism and violence. The song artfully captures the era's thrashing political climate, impatience with corruption and growing militancy.

Sue's Changes was named for Sue Graham, Mingus's wife and publisher of Changes, a provocative literary and music magazine. The composition is a actually a suite, shifting from ballad to a tempestuous, up-tempo free-jazz section followed by a return to the ballad format.

Devil's Blues is a raucous march-time blues credited to Mingus, Adams (who sings) and Gate Mouth Brown. The song is emotional and fiery, and may be the album's only soft spot. A stronger producer may have pushed for another instrumental on the same sophisticated level as the others.

Duke Ellington's Sounds of Love was written by Mingus soon after Ellington's death in May 1974. This sighing, romantic ballad features traces of Billy Strayhorn's Lush Life and A Flower Is a Lovesome Thing. Pullen's piano solo is gorgeous, Adams's solo is breathy and purposeful, and Mingus's solo is clearly a eulogy to Ellington, his musical inspiration. The track, like much of the album, is a masterpiece.

Too often we forget how remarkable Mingus was as a composer, bassist and leader. This album serves as a gateway back into his music and a revisit with his discography.

JazzWax tracks: You'll find Charles Mingus's Changes One here. It's also available at Spotify, along with the equally dynamic and provocative Changes Two.