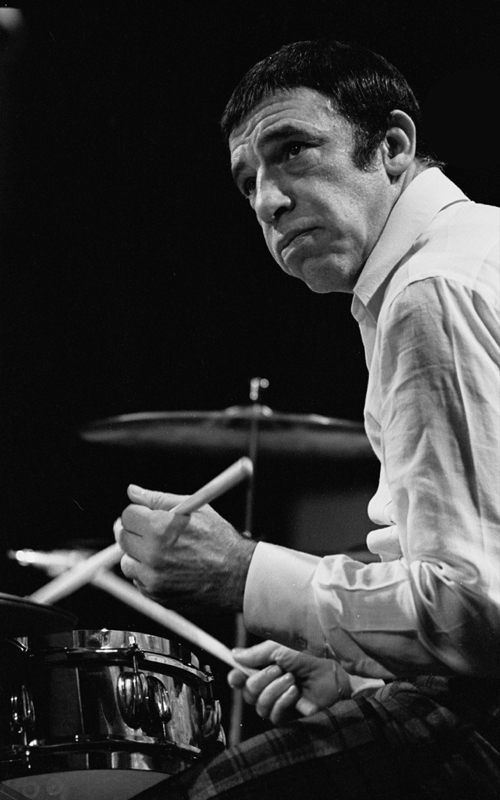 slideshow
Las Vegas, -- The much awaited return of the Buddy Rich Memorial Concert is now over. In late August, Cathy Rich, daughter of the late, legendary drummer Buddy Rich, confirmed plans for the Buddy Rich Memorial and that it would take place at Hammerstein Ballroom in New York City on October 18. Her company, Scabeba Entertainment, Drucker Labs and drumming icon Neil Peart will produce this historic event, which promises to be the most intense and compelling ever in terms of the performers and sponsors.

“The concerts themselves are an expression of Buddy's generous musical spirit. It's our goal to give back as much as possible and have all parties involved leave with a good feeling." Rich noted. “We should also point out that all our sponsors will make this event truly amazing. Without the love and support from all sponsors, these events would not happen."

In addition to the sponsors listed, Drumchannel.com will unveil a presentation on Buddy Rich and will LIVE STREAM the event over the web. In addition, the entire affair is being taped in high-definition for a Christmas DVD release.

A Legendary Lineup This years lineup, one of the most diverse to be scheduled for The Memorial, features some of the most well-respected drummers in the world, who will be performing original rock and jazz arrangements with the big band.

Terry Bozzio formerly of Frank Zappa's band and his own platinum selling band, Missing Persons. Terry went on to revolutionize drumming with his one-man shows and clinics featuring his sea of drums and percussion.He’s performing a Zappa tune, among others.

John Blackwell who was with Prince's band and most recently toured the world with Justin Timberlake.

New York drumming icon Tommy Igoe, leader of the Birdland Big Band and in demand session and Broadway drummer.His recent educational DVD's are currently the number one sellers in the marketplace.

This is also the debut of Buddy's 23 year old grandson Nick Rich playing for the first time in his grandfather's big band. Nick is an in demand drummer on the west coast,having recentlyrecorded with platinum selling artist Ray J.

Joining Buddy's Big Band will be Late Show with David Lettermanbass player Will Lee. Bassist Jeff Berlin will appear as a special guest.There will be a special appearance by Guitar Center 2007 Drum Off winner Donnie Marple.More surprises will be added.

What makes this year’s show hip is the artists having big band arrangements made of some of their most popular hits, as well as playingtheir favorite Buddy Rich charts. And, it will take on a life of its own since the show will be streamed live globally by the Drum Channel, and recorded in Hi Def for worldwide release.

“After a ten-year hold on this world wide drum event, we are coming back with a vengeance", said Rich. “We started doing these concerts in 1989 and they were the first of their kind. I originallyhad the idea of havingall the greatest drummers in the world sitting in with my father’s big band, playing his charts with their own unique spin.

A giant Buddy Rich Memorial Concert Product Promotion began in late August next with a chance to win dozens of prizes including Roland V- drums, snares from Dunnett, George Way, Buddy Rich Drum Company, and DW, and much more. Be sure to reserve your tickets now.