Three Short Stories is inventive modern mainstream jazz and a strong step forward for Bartosz Hadala, a musician who deserves to be better known.
—Scott Yanow 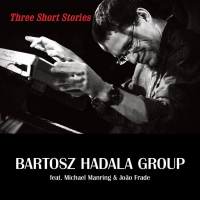 Three Short Stories invites the listener to share Hadala's deeply personal journey through a musical narrative presented through arrangements which are unique yet accessible and delivered with brilliant musicianship.

“It takes a lot of passion and determination to become a professional musician, and even more determination to keep that flame of passion burning brightly. I want to thank my friends Luis, Kelly, Eric, Brad, Marito, Michael, and Joao for sharing their time and talent with all of us, and for making this world a better place. With such great musicians, the sky is the limit." —Bartosz Hadala

Three Short Stories is available on all major streaming platforms as well as the artist's website.

Born in Poland, Bartosz Hadala started his musical education at the age of seven at the local School of Music. As a teenager, he participated in workshops, festivals, and competitions throughout Poland and, at the age of 15, became the youngest finalist in the Mieczyslaw Kosz International Jazz Piano Competition. Two years later he was awarded a scholarship to study at the prestigious Berklee College of Music in Boston.

After moving to Toronto, Canada in 2010, Hadala released his critically-acclaimed debut jazz album entitled “The Runner Up", featuring Hadala's original compositions and the talents of jazz greats Randy Brecker on trumpet and Antonio Sanchez on drums.

In Canada, Hadala performs with artists such as drummer Marito Marques, bassist Brad Cheeseman, guitarist Eric St-Laurent, and saxophonists Kelly Jefferson and Luis Deniz among others. He also continues to tour his native Poland as a leader and sideman with legendary Polish jazz musicians such as Jacek Pelc, Piotr Olszewski, Henryk Miśkiewicz, Maciej Sikała as well as Grammy-winning bassist Paweł Pańta and drummer Cezary Konrad.

Hadala is currently writing his thesis for his Master's Degree in Composition at York University in Toronto.