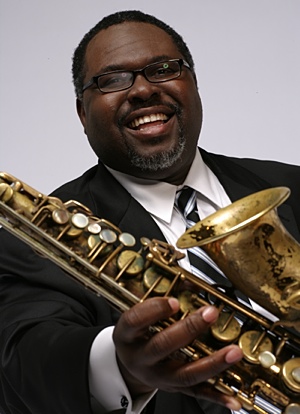 slideshow
Alto saxophonist Sherman Irby will celebrate the release of his latest CD “Live At The Otto Club" at Dizzy's Club Coca-Cola in New York City on Monday, February 22, 2010 with sets at 7:30 and 9:30 p.m. Performing with Irby at the event--which coincidentally takes place exactly two years to the date after the new CD was recorded in Naples, Italy, are Rick Germanson (piano), Gerald Cannon (bass) and Darrell Green (drums).

Irby is already well established as one of the leading standard-bearers of an illustrious instrumental lineage whose roots can be traced back to jazz giants Johnny Hodges and Cannonball Adderley.

Yet it was not until “Live At The Otto Club" that he simultaneously realized two dreams: To record an album of “standards" and to capture in a concert setting the “warm and soulful sound" (All Music Guide) and the “fleet technique and steeped-in-blues sensibility" (Chicago Tribune) that has distinguished not only Irby's recordings as a leader for Blue Note and his own label Black Warrior Records, but also his playing as a member of such diverse ensembles as the Jazz At Lincoln Center Orchestra and groups led by pianist Marcus Roberts, trumpeter Roy Hargrove, drummer Elvin Jones and trombonist Papo Vazquez.

“We learn how to play jazz by studying popular music from the Great American Songbook, classic compositions by the jazz masters who came before us and the contemporary works of our peers. We hone our craft playing in small clubs and venues. This album provided an opportunity for me to document what I've learned in the kind of setting where I learned it," Irby said.

The CD showcases some of the music Irby performed leading a quartet comprised of two Americans and two Italians during a tour of Italy in February 2008. “Pianist Nico Menci is one of Italy's hardest swinging pianists and bassist Marco Marzola is not only a solid musician but a respected educator as well," Irby said. “I've been working with Darrell Green, one of the hottest young drummers to come out of California and a rising star in this music."

Irby offered the following comments when asked about the selections he included on Live At The Otto Club:

Oscar Pettiford's “Bohemia After Dark" has always been one of my favorites. It's so open, you can go anywhere with it. We led off the night with it, playing it at a medium tempo. I always believe in swinging the first tune. That lets the audience know who we are, and what we are about.

“Depth" is a Roy Hargrove tune that fits the definition of a “standard" in my book since when I was in his band we played this every night. I believe one of the main reasons that songs like Dizzy's “A Night in Tunisia," Bird's “Au Privave" and Herbie Hancock's “Maiden Voyage" became so popular was because everyone played them. This is why I always play a song written by one of my peers. I arranged this version and it is also featured on my previous album, Organ Starter.

“Laura's Love Song" is a bossa nova I wrote for my wife. It's not a standard in the strict definition of the word, but it's my standard as I can't imagine playing a concert without including this song on the playlist.

“Countdown" is a John Coltrane masterpiece that's constantly talked about, but rarely played. I owe my courage to play this song to my former Hargrove band mate and longtime friend, Gerald Cannon who's currently a member of the McCoy Tyner Trio. Gerald called me after one of their performances, and told me that while playing the blues, Tyner had a way of fitting “Countdown" within its form. We decided to learn the tune so we could figure out how he did that. We never did figure that out, but we learned how to play the song! Darrell was swinging so hard on this one that I didn't want to stop.

“Four" is credited to Miles Davis and is a standard you'll hear every time you go to a jam session. It's usually played at a fast tempo, but I choose to play it as a ballad. It has a beautiful melody and its “changes" are in the style of the Great American Songbook.

“In Walked Bud" - Well, all I can say is how can anyone play a gig and not play a Monk tune?!? Check out Marco's simple, but playful solo that I often find myself singing in my head. Whatever happened to the days when it was possible to sing a solo we heard?

ABOUT SHERMAN IRBY Born and raised in Tuscaloosa, AL, in 1968, Sherman Irby began playing music at age 10, almost immediately recognizing that it was his life's calling. Upon graduating from high school - a period during which he had the opportunity to play and record with Gospel immortal James Cleveland - Irby attended Clark Atlanta University, from which he graduated with a B.A. in Music Education. He joined Atlanta-based piano legend and former Jazz Messenger Johnny O'Neal's quintet in 1991.

After moving to New York in 1994, Irby quickly connected with the fertile and vital scene at Smalls, where he was a regular until 1997. While playing regulary there he attracted the attention of Blue Note Records and released his first two albums as a leader -- Full Circle (1996) and Big Mama's Biscuits (1998) on this legendary label.

During his Smalls period Irby also toured the U.S. and the Caribbean with the Boys Choir of Harlem (1995); was a member of the Lincoln Center Jazz Orchestra and recorded and toured with Marcus Roberts and participated in the incomparable Betty Carter's Jazz Ahead Program (1995-1997) before he began a four-year stint with Roy Hargrove (1997- 2001).

In 2005 Irby formed his own label, Black Warrior Records, on which he released the albums Black Warrior, Faith, and Organ Starter. In recent years, in addition to focusing on his own bands he also he toured as a member of the final group led by the peerless Elvin Jones and after Jones's death, joined Papo Vazquez's Pirates Troubadours. Irby rejoined the Jazz at Lincoln Center Orchestra in 2006 while continuing to perform with his quartet and his ensemble Organomics.