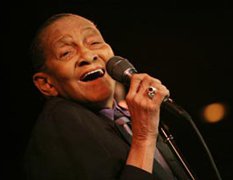 It is sad to hear of the recent deaths of Aaron Sachs and Jimmy Scott.

Sachs was a gifted clarinetist and tenor saxophonist who never became as well known as many of hiscontemporaries despite yeoman work in bands led by Van Alexander, Red Norvo, Benny Goodman, Earl Hines, Benny Goodman, Tom Talbert and Buddy Rich, among others. In the 1960she became a stalwart in Latin jazz, playing for Machito, Tito Puente, and Tito Rodriguez. Sachs would have been 91 on the 4th of July. I recently saw him described—dismissed, really—as a smooth clarinetist and a capable Al Cohn tenor saxophonist. He was far beyond capable and no mere imitator, as you will hear in his solo on “Do Nothing ‘Til You Hear From Me” in Talbert’s arrangement from his classic 1956 album Bix, Duke, Fats. Sachs’ tenor solo comes 4:50 into the track. Other soloists are Eddie Bert, trombone; Herb Geller, alto saxophone; and Joe Wilder, trumpet.

Singer Jimmy Scott died on June 12 at the age of 88. His high contralto resulted from a childhood hormonalcondition that blocked normal vocal development. The voice made him an object of ridicule and abuse. He managed to wrap the anguish of that discrimination into his artistry as he adapted his unusual voice to a style that attracted a wide audience. His admirers included Ray Charles, Billie Holiday and the soul singer Marvin Gaye, who was heavily influenced by Scott. In this video, Scott sings “Time After Time” and speaks a little about his performance philosophy.

For Richard Williams’ obituary of Jimmy Scott in The Guardian newspaper, go here.