By HRAYR ATTARIAN
January 4, 2019
Sign in to view read count 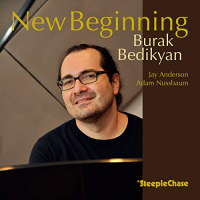 On his fourth release as a leader, the thoughtful and captivating New Beginning, pianist Burak Bedikyan has matured both as a composer and improviser. The album is Bedikyan's first with a trio and consists mostly, although not entirely, of original material. The cadence and the melody within each piece transform in delightfully surprising ways while maintaining thematic consistency both within individual tracks and among them.

For instance, "Rue Dauphin" starts off with Bedikyan's contemplative, unaccompanied refrains. Bassist Jay Anderson and drummer Adam Nussbaum contribute spare beats that, together with the pianist's resonant keys, form a mellifluous tune in a relaxed and celebratory ambience. After each musician takes his turn in the spotlight, with eloquent and exuberant improvisations, the music becomes an angular, stimulating three-way conversation which dovetails into the next piece. The short and energetic "Leo" follows with a breathtakingly fast and agile group performance that crackles with spontaneity.

Similarly, the wistful "Ayça" starts off as a ballad steeped in eastern motifs. Bedikyan plays yearning phrases that mix with Anderson's lyrical lines and Nussbaum's sashaying brushes, and create passionate sonic poetry. Anderson's agile and warm solo further underscores this poetic sense. Bedikyan showcases his own virtuosity on "Epilogue" as he goes from a haunting and, a touch, dissonant extemporization, with western classical influences, to a meandering one that alternates between dense resonant chords and cascades of bluesy notes. Nussbaum drives the music with his thunderous and elegant polyrhythms.

Bedikyan has titled New Beginning correctly as it is a departure from his previous work, yet is rooted firmly in it. On it Bedikyan finds his own, unique voice. He also expands on inventive ideas and concepts without hesitation. Moreover, he demonstrates remarkable aptitude as a band leader as well as superb camaraderie with his sidemen. This recording is a definite high point in an otherwise stellar career.