Zoe Obadia is a saxophonist, composer, and teacher based in New York City. Originally from New Jersey, she started playing the saxophone at age nine and became immersed in a community of great jazz musicians and educators in her area.

She moved to  New York in 2014 to begin her studies at the Juilliard School, where she learned from Ron Blake, Kenny Washington, Dan Block and others, earning an undergraduate and masters degree. She has since performed in New York City as a leader and sideman at venues such as Dizzy’s, Mezzrow, Birdland, and Jazz at Lincoln Center, and has had the opportunity to play with  Wynton Marsalis, the Mingus Big Band, Dave Stryker, Diane Schuur, and others. In 2021, she appeared on pianist Dabin Ryu’s debut album, “Wall”. Zoe also has a passion for teaching and is currently a private instructor at Virtu.Academy and Fordham University. 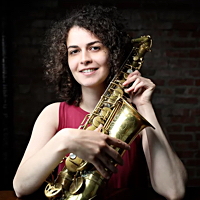 All About Jazz musician pages are maintained by musicians, publicists and trusted members like you. Interested? Tell us why you would like to improve the Zoe Obadia musician page.