French composer-arranger, trumpeter, ethnomusicologist, Yohan Giaume is building an oeuvre that combines his passion for world music traditions, large-scale collaborative efforts, explorations of new genres and creatively enriching partnerships with other musicians. For almost 15 years, Giaume has been traveling around the world to explore the origins and intersections of music between the Americas, Europe and Africa. His motivation is less academic and more about creating contemporary settings for vital traditions so that they continue to inform and inspire. After studying trumpet, composition, orchestration, and jazz studies at the French Conservatories of Lyon, Chambéry and Grenoble as well as Ethnomusicology at the University of Sorbonne in Paris, Giaume sought first-hand experience with music of the world. He studied, lived and worked for various periods in Cuba, Argentina, Uruguay, Peru, Morocco and Louisiana. His collaborations include such artists as La Banda de Santiago de Cuba, Benito Suarez, Kocani Orkestar, Juan Carlos Caceres, Felix Casaverde (Susanna Baca), New Orleans-based clarinetist Evan Christopher, the Minnesota Orchestra, Marrakech Jazz Beat, Christian Vieussens, Manu Dibango to name but a few. Giaume’s latest work focuses on the indigenous traditions of New Orleans, the starting point of his latest creation titled «Whisper of a shadow».

"Mr. Giaume’s reworkings of Gottschalk’s themes and his own original compositions—which range from ethereal to raucous, stately to tightly swung—form an imaginary “conversation” between musical nomads across time and space. With his music, Mr. Giaume seems intent on loosening the grip of the nostalgia that often threatens to bury classical music and jazz, and to reveal an essential soulfulness that transcends categories. This album, billed as “Opus 1,” may cause listeners to wonder where such liberating acts will lead him. " 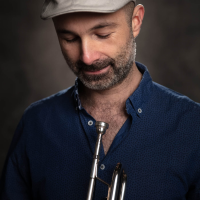 All About Jazz musician pages are maintained by musicians, publicists and trusted members like you. Interested? Tell us why you would like to improve the Yohan Giaume musician page.