Amongst the international fraternity of improvisers who play in Russia, the abilities of the Moscow-based pianist Yakov Okun are anything but a well-kept secret. At 38, Okun "who leads a strong all-Russian trio with Makar Novikov on bass and Alexander Mashin on drums, and also sidemans with the profound trumpeter German Lukyanov "has toured both in Europe and his homeland with a multi-generational cohort of luminaries, a short-list of which includes Lew Tabackin, James Spaulding, Eddie Henderson, Craig Handy, Mark Turner, Donny McCaslin, Jimmy Greene, Alex Sipiagin, Gary Smulyan, Larry Schneider, and Jeremy Pelt.

For a sense of the breadth and strength of Okun’s conception, and his powerful chops, go to Youtube and look for a clip that documents him on the bandstand with the late bebop master Johnny Griffin, who has just finished soloing on “Lover Man,” Okun uncorks a long, relaxed, swinging, “horn-like” solo with enough inventive twists and turns to keep Griffin smiling, clapping his hands, placing hands to heart, and verbally signifying "when the pianist seems ready to conclude his declamation, he compliments him by requesting another chorus.

Okun displays similar prowess and scope throughout his Criss-Cross debut, a powerful trio recital with New York A-listers Ben Street on bass and Billy Drummond on drums that spans three Okun originals and five songs drawn from the less-investigated corners of the jazz canon. Though they had just a single rehearsal to absorb the material, the trio interacts in equilateral triangle fashion, spurred by the leader, a bebop devotee who doesn’t play licks, inhabits a broad timeline of vocabulary with deep soul, a sense of humor, and an endless will to swing, and executes his ideas with crisp authority, nuanced touch, and imaginative flair. While he navigates pathways that are far from virgin territory, it’s clear that Okun has found an aesthetic room of his own.

“My first records were Duke Ellington, Horace Silver, Charles Mingus with Eric Dolphy and Jaki Byard "the highest, best-taste music,” Okun says of the first principles that guide his musical production. “It’s a main point of how I want to play.”

The records to which Okun refers belonged to his father, Mikhail Okun, one of the most prominent Russian jazz pianists of his generation, who built his collection on LPs purchased by Soviet diplomats during their postings in the West. Although Yakov listened to them "and to Thelonious Monk, the Bill Evans Trio, Sonny Rollins, John Coltrane, Ornette Coleman, Tadd Dameron, Bud Powell, and a host of others "throughout his formative years, he played exclusively classical music until age 16.

Asked if he had aspired to a classical career, Okun responds, “Never. It was boring to me, because I never thought about being a performer only, but also a composer, as a jazz musician is when improvising.” When it was time to audition for conservatory, Mikhail Okun gave him a transcription of Bill Evans’ performance of “One For Helen.” “Once I learned it, I thought how beautiful it was that now I could play something like that on piano. That’s what I wanted to do in the future. How to hook things up "next phrase, next melody, next harmony. Everything I listened to was like a pocket of the greatest music that now opened up.”

After graduating in 1992, Okun launched his professional life in the wild milieu of post-glasnost Moscow. “It was a hard period to be a jazz musician,” he recalls. “Good musicians had to play in restaurants "Russian and European dance music or American popular music like Frank Sinatra’s ‘New York, New York’ or ‘Strangers in the Night.’ Gangsters wanted to hear what was in the American Mafia movies, and you could earn a lot of money. My father had a lot of gigs, and I’d fill in when he over-booked, with singers or shows with dancers. He told me, ‘Yasha, you should go to the restaurant, and play not only lines from McCoy Tyner and Herbie Hancock.’ He told me to play the old Soviet songs. ‘That’s the way to play the real music,’ he said. ‘After you learn harmony and rhythm, you go back to playing by ear, as you did at the beginning.’”

Okun gives his ears a workout on the set-opener, “Pent-Up Chaos,” signifying on Sonny Rollins’ 1956 classic “Pent-Up House” that blends dodecaphonic principles with a rhythmic grid that alternates between 9/4 and 4/4 grooves. “It feels like what Sonny did in the ‘60s, both outside and inside,” Okun says, noting that the tonics are G and A-flat. Okun elicits a kind of Lennie Tristano meets Hassan Ibn Ali vibe, making full use of his left hand, carving out lines that springboard from immaculately executed contrapuntal figures, mirrored by Street, whose gut string sound is a highlight of the date, and prodded by Drummond, who brings the tune into its final phase with a well- wrought solo.

Also from Rollins’ 1956 corpus is “Plain Jane,” a ingenious “rhythm changes” line that debuted on Sonny Rollins, Vol. 1 [Blue Note]. Okun reharmonizes the B section to imply the outer partials, changes the beat from 4/4 swing to straight-eighth funk, and offers a thoughtful, percussive piano solo filled with dissonant implication.

“Spillikins” is a tuneful original blues inspired by Ornette Coleman’s late ‘50s corpus. “I love the folk blues feel in Ornette’s music, the simplicity of it, the way it draws upon the drum,” Okun says. Propelled by Drummond’s buoyant Billy Higgins-esque beat, he uncorks a graceful, idiomatic declamation, pausing only for brief exchanges with his mates.

“To me, Eric Dolphy is one of the saints of jazz music,” Okun states in regard to “Tomb,” a dissonant line that he wrote some years ago for nine horns. “It was very hard to figure out how to play it with two hands, very hard to perform,” he laughs. Street opens the soloing with a statement that bears out Okun’s remark that “it sounds like Ben and I are almost the same taste person. We’re very close in understanding what to play "trying to keep all tradition and also playing very, very hard.”

In addressing Fats Waller’s “Jitterbug Waltz,” which Dolphy famously covered in his starkly intervalled manner in 1963, Okun hews more closely to traditional strategies with a bravura, spontaneously conjured arrangement and improvisation. “I’d never played it before, but I remembered that I love it,” he says. “I love to play the older repertoire at home when I’m practicing "and my wife also likes how I play this material.”

While speaking his piece on “Jitterbug Waltz,” Okun slips in a sly quote from Thelonious Monk’s “Misterioso”; his reverence for Monk, palpable throughout the date, is explicit on three numbers. Consider his highly melodic, contrapuntal treatment of “Kind Bug,” from the 1947 animated Soviet film, Zolushka (Cinderella). “It has no syncopation, and it has the sort of character Thelonious did, like if you’re a child and playing on piano,” he says. “It’s interesting to try to play that with a good result.” Monkish imperatives animate his introspective statement on the less innocent but no less elemental emotions of “Falling In Love Again (I Can’t Help It),” which Marlene Dietrich sang memorably in The Blue Angel, Josef Von Sternberg’s iconic 1930 film.

In addressing John Coltrane’s “Giant Steps,” Okun eschews melodic concerns for an involved invention on the harmony. “The melody is very simple and doesn’t show us the real thing that ‘Giant Steps’ has,” he says. “So I just play on that fantastic progression.”

Throughout the proceedings, Okun plays with such palpable life-force and idiomatic understanding that a Blindfold Testee might assume the person playing breathed the same air as the musicians he references. Devotees of hardcore jazz will look forward to the next installment. Show less 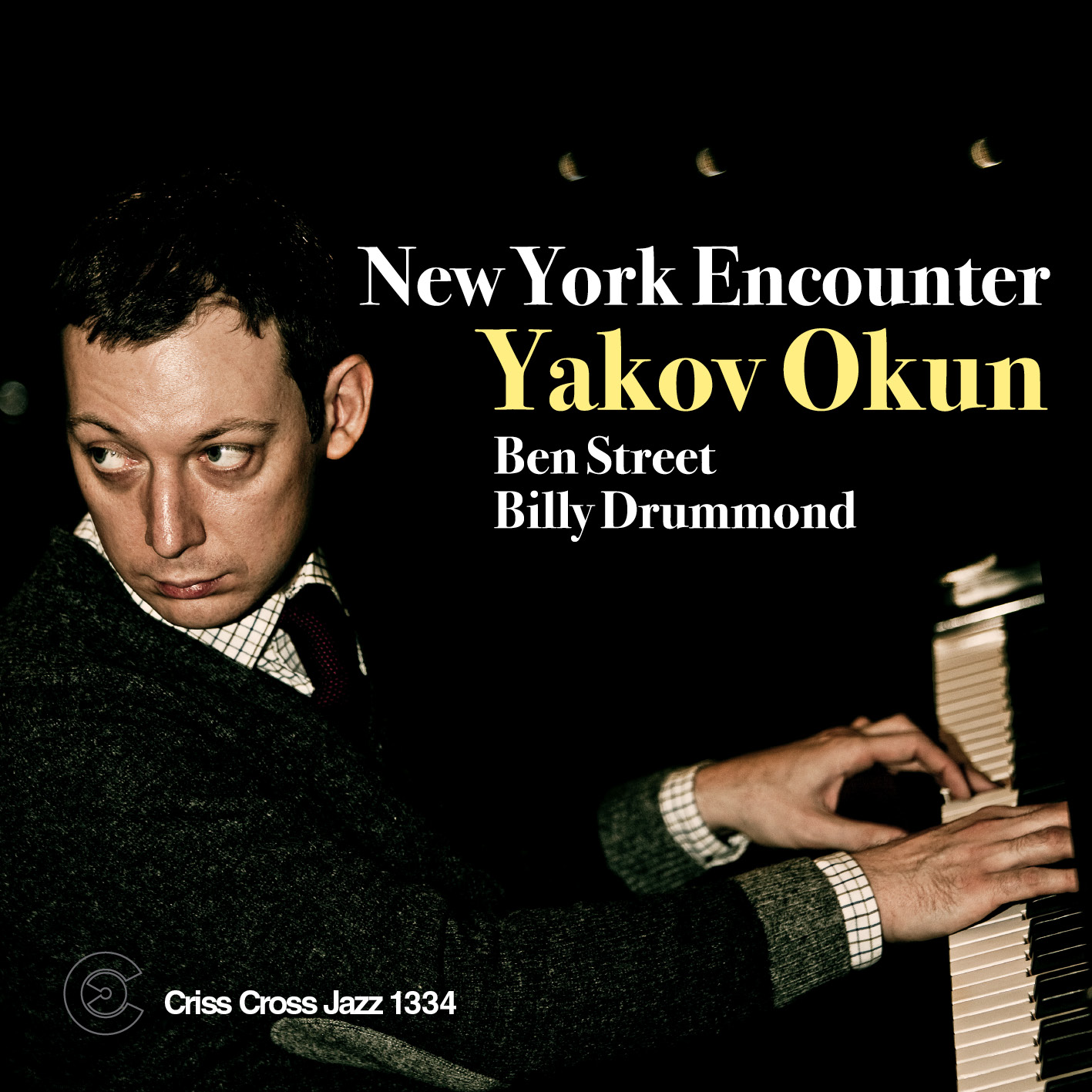 All About Jazz musician pages are maintained by musicians, publicists and trusted members like you. Interested? Tell us why you would like to improve the Yakov Okun musician page.