Hers is a twilight voice, a liquid silk from the heart of Tennessee. It is tailor-made for lullabies and lyric blues; and so, for that matter is Valerie June's spirit.

For years June quietly built her brand in Memphis, where magnetic Southern charm and stunning stage presence earned her a feature spot on MTV web series $5 Cover. But no reality show could capture the true reality of this talent: a self-taught guitarist, banjoist and songwriter, June has crafted a sound that draws on the best of southern traditions.

This is organic moonshine roots music, a warm pastiche of achin' vintage country and powerful delta blues- and a style she had delivered on three solo albums, including her eponymous 2010 release. Although currently based in New York, Valerie June’s music has been embraced with overwhelming praise throughout the US, Ireland, Hungary and Germany.

Valerie is also a member of The Wandering. The Wandering gathers five traditionally-minded artists from Memphis and North Mississippi and features the string work of Luther Dickinson (North Mississippi Allstars, Black Crowes) and a quartet of distinctive female voices and musicians — Shannon McNally, Amy LaVere, Valerie June, and Sharde Thomas, erstwhile leader of the Rising Star Fife and Drum band.

. John and Dan Auerbach of the Black Keys, who is coproducing her next album. Her most recent CD, now available, is “Valerie June & The Tennessee Express,” produced by Ketch Secor of the Old Crow Medicine Show and featuring members of that band. Show less 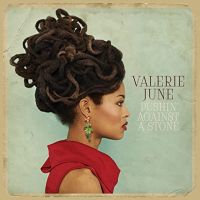 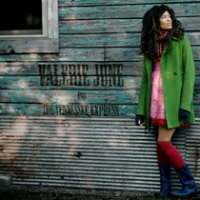 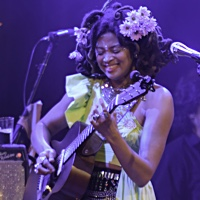 All About Jazz musician pages are maintained by musicians, publicists and trusted members like you. Interested? Tell us why you would like to improve the Valerie June musician page.