This album takes the best of three studios recording sessions, featuring both original works and re-arrangements by Tullia Morand, saxophonist and young jazz artist on the parisian scene. She's surrounded with great french jazzmen to realise this tracks both faithful to the classic jazz tradition and modern, pure and subtle tones. 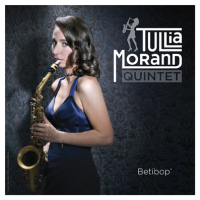 All About Jazz musician pages are maintained by musicians, publicists and trusted members like you. Interested? Tell us why you would like to improve the Tullia Morand musician page.