Trans-Global Underground had to happen. They refused to accept that dance music had to be four to the floor house. They refused to accept that something called ‘World Music’ ever existed. They slowed down hip hop and sped up dub. They sang in whatever language they felt like singing in. they were DJs but they played live. Their influence is all over the place, sometimes benign, sometimes joyful, sometimes beautiful and sometimes bloody dreadful. But the price of innovation is often a trail of shite left in your wake. A thousand dodgy car adverts with colourful tribespeople, colonialised blanded out ethnic samples and ten year old beats…that’s not it at all…

We’re talking about the early nineties here, when drum and bass were two separate things and trip hop was something you did on a paving stone. It’s a long time ago, many brain cells have been lost since and, in any case, it’s often been uncertain as to who Trans-Global Underground were from one day to the next. Names were changed at will, members came and went and often came back again, so forgive us if you were there at the time and it all looked different.

So, fact: the name Trans-Global Underground followed on from the recording of a single, ‘Temple Head’ for Nation records, a label created specifically to fuse western dance music with Arabic music, Asian music, African music…then more a dream than a reality. Some names: (some only dreamt up later) Man Tu, Tax D, Alex Kasiek, percussionists Goldfinger and Terry Neale the Human Quica, rapper Sheriff, Aki from the soon to be notorious Fun-Da-Mental. Some background experiences: DJ culture, Indian classical, reggae, bhangra, hip hop, community politics, underground art and eighties pop. ‘Temple head’ was the result of this meeting and Trans-Global Underground was the result of ‘Temple Head.’

‘Temple Head’ caused delight and confusion in equal measure. DJs such as Andy Weatherall Danny Rampling and Monkey Pilot caught on fast while other DJs, confronted by a record featuring tablas, Polynesian vocals and playing at 95bpm, simply played the thing at 45rpm instead of 33. It became Single of the Week in Melody Maker and got played on daytime Radio One. The first public faces of TGU appeared; three Nepalese Temple guardians, an identity which caught the mood of the single and saved effort on photo sessions.

At this point, along came Deconstruction Records, quick to seize on anything going on on the dance scene, with an offer to make an album for them. Quickly an assortment of friends, associates and distant relatives got thrown into a studio in Euston and recorded the fundamentals of what was to be TGUs first album. Tuup, a very old ally, got involved at this point and Jalal from Loop Guru co-wrote one track. The sessions also marked the first appearance of vocalist Natacha Atlas, who had recently departed from Invaders of the Heart. She gave a performance that reduced the whole studio to tears, then capped it by belly dancing round the control room wearing a copy of the Daily Mirror. So she was in.

Everyone was delighted with the results except for Deconstruction, who couldn’t see the point of any of it. Well, it was their money. Like it or not, a momentum had started up and a live line-up was put together, consisting of ManTu, Dubulah, Natacha, Goldfinger and Kasiek, with Tuup as a floating extra member. Most British dance acts of the time consisted of one singer and two keyboard players in anoraks. Trans-Global Underground rapidly gained a reputation for flamboyant live performances, dramatic costumes, belly dancing, endless percussion and, of course, Nepalese Temple guardians. They returned to their spiritual home at Nation and recorded a second single, ‘I, Voyager.’ This marked the debut of beat poet and percussionist Neil Sparkes, who became a regular member of the live team.

By the time of the third single, ‘Shimmer,’ a track from the Deconstruction sessions featuring Tuup, the word was spreading and Nation, with Fun-da-Mental and Loop Guru also getting serious media coverage, finally had the wherewithal to get an album out. ‘Dream of 100 nations’ basically consisted of the Deconstruction sessions plus ‘I, Voyager’ and a couple of newer tracks. The reviews elsewhere on this site tell you something about the sort of acclaim TGU were getting by this point; the combination of so many musical styles was something no one had got away with before and the live performances were getting ecstatic reactions. ‘Dream of 100 Nations’ was acclaimed as one of the year’s best debuts, and when it got into the top fifty it was inevitable that another major company would start throwing its weight around. This time it turned out to be Sony, who financed the second album, ‘International Times.’ By this time, the basic live line-up was Mantu, Dubulah, Natacha, Neil Sparkes and Attia Ahlan. This was soon augmented by rapper Colerdige and multi-instrumentalist Larry Whelan. This line-up began TGUs adventures into Europe and when possible the show grew even bigger with the addition of percussionist Satin Singh.

Beyond the live shows, TGU were also busy remixing and producing. They captured a unique little niche by specialising in remixing industrial bands such as Grotus and Headbutt, as detailed elsewhere on this site. Their biggest task, however was producing Natachas debut album for Beggars Banquet Records, ‘Diaspora’ which was more or less an unofficial Trans-Global Underground album, in that it was based around the live line-up of the time Her second album, ‘Halim,’ released in 1997, moved away from the TGU sound in a more purely Arabic direction; however the TGU produced single ‘Amulet’ was the track that did the most to get her taken seriously by Arabic audiences.

As for TGU themselves, in 1996 ‘Psychic Karaoke,’ their third official album, was released. Probably the groups most polished album, it took the line-up of the time about as far as it could go, so, after a lengthy spell of touring, it disbanded. Neil Sparkes and Dubulah went on to form Temple of Sound with Terry Neale and Larry Whelan went on to work with Banco de Gaia and Natacha, who, while concentrating on her solo career, continued to appear live with TGU.

Once again, Trans-Global Underground was a floating, indefinable venture. For a while it was more of a club than a group, utilising the services of North London clubland legends DJ Nelson Dilation and VJ Sheikh Ad Helik. The reputation of the live act continued to hold up, aided by the introduction of Johnny Kalsi, percussionist and leader of Indian drumming troupe the Dhol Foundation.

TGU travelled into Eastern Europe, played in Sarajevo to mark the end of the war in Yugoslavia, and made their first appearances in the USA and Turkey. The album that followed these adventures, ‘Rejoice, Rejoice’ has a more in depth section to itself elsewhere on this site.

For the tour around 'Rejoice Rejoice' Tuup who had appeared on every album to date, reappeared onstage for the first time in a few years, along with sitarist Sheema Mukherjee who had played on the album. TGU pended 1998 with their biggest…and most unexpected…tour to date, supporting Page and Plant on a series of massive European shows, gaining a new audience and pissing off the odd Central European rocker on the way.

By 1999 Natacha and Johnny's own projects were taking up too much of their time to continue playing with TGU, but Natacha's third album, 'Gedida' was largely TGU produced, notably the single 'Mon Amie La Rose' which was a big hit in France, and the band still work with her on recording projects.

Around the same time, TGU parted company with Nation Records…though they still keep bumping into each other…so it was time for a change. Two more of the cast of 'Rejoice Rejoice' came onboard fulltime…Punjabi percussionist Gurjit Sihra and Zulu vocalist Doreen Thobekile, who had worked with Hamid before on the Xangbetos project for Nation. With a new burst of energy, TGU started travelling further outwards, touring in India, Tunisia, Turkey, South Africa and playing regularly around Eastern Europe.

In between, some time was also spent in Egypt working with various Egyptian artists including Hakim, Riko, Mika Sabet and of course Natacha Atlas. TGU worked extensively on Hakims first official western release ‘Yaho’ and got involved in a residency in a Cairo nightclub, before heading back to London to complete the new TGU album.

The Egyptian sessions were a natural result of TGUs work as remixer and producer for a number of Middle Eastern artists; over this period they had hits in the Arabic speaking world plus a number one hit in Turkey with a remix of, of all things, a Greek folk song called ‘Capkin’…

The latest TGU recordings became the album 'Yes Boss Food Corner' which was half finished when the band signed up to Ark21 Records new label, Mondo Rhythmica. The album was released in 2001 but the relationship was shortlived, although the touring stepped up, with the band visiting Kazakhstan, Sri Lanka, Venezuela and an endless list of others.

After the end of the touring for ‘Yes Boss Food Corner’ TGU concentrated on DJ sets and soundsystems, with which they could venture into many corners of Europe hithertoo unreachable. In 2003 Coleridge opened a dance record business of his own and TGU and Doreen Thobekile began work on a solo project of hers. In the aurtumn TGU began work on a new project which became the sixth album, ‘Impossible Broadcasting.’ This was recorded in London, Prague, Budapest and notably in Sofia, as part of a studio and live project with legendary Bugarian tradtitional group Trio Bugarka.

For the next tour the live band now stripped down to a 5 piece, and, with once more a more club based line-up, started playing the UK regularly for the first time in more than 6 years, turning up regularly at festivals and venues throughout the country.

Doreen Thobekliles solo album, ‘London Zulu’ came out in 2006, and is available here. Members of TGU still appear with her at live shows…..and indeed, she often appears onstage with TGU, as well as most recent arrivals, Rav on dhol and tabla, and Krupa on vocals, both of whom appear with the rest of the family on the current album ‘Moonshout.’ Show less 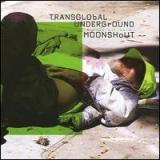 All About Jazz musician pages are maintained by musicians, publicists and trusted members like you. Interested? Tell us why you would like to improve the TransGlobal Underground musician page.