Tony Williams is a legendary alto saxophonist who truly represents "The Sound Of Philadelphia". Born and raised as a child in Chattanooga, Tennessee, Tony soon made it up north where he grew up outside of Philadelphia in Crestmont, Pennsylvania. He grew up playing the horn as a youngster and soon found his love with the music. He played in school bands in high school (Abington High School) and later went to college at Tennessee A & I (presently known as Tennessee State University) and played with their band. He transfered to Central State University in Ohio and hooked up with music opportunities there.

After graduating from Central State he spent time in the military as he found the way to also play in the 75th Army Band at Ft. Belvoir, Virginia. Tony is a true educator as well as a great musician. He taught in the Philadelphia School System for over 25 years and retired after period teaching health & physical education, coaching and being a vice principal.

Music was always in Tony's blood, schedule and lifestyle. Tony Williams found a way to teach, coach, administrate and perform music professionally in the Philadelphia area as well as on the road nationally and internationally while teaching for over 20 years at Barrett Junior High School in South Philadelphia.

Tony had many opportunities to travel and play music full time on the road but Tony had a passion and love for his wife, Gloria and 3 children. Tony's family has been a strong part of the backbone and support of his music. Gloria has to be considered Tony's biggest supporter. Greg (Tony's oldest son) is the owner of BDG Records which is heavily involved in Tony's promotions. Antoinette (Tony's daughter) played a solid part behind the scenes in Tony's productions and engagements. Glenn (Tony's youngest son) is a gifted and talented saxophonist, pianist and recording artist.

Tony also had a passion to "keep jazz alive" so it was not enough for Tony just to be a professional musician. He had to give back and he did that in a way that can not be matched by many. Tony Williams started a jazz theory and music program in his school; Ada H. Lewis Middle School Jazz Band. Not long after, he started his own jazz theory and music program that is now known as the Mount Airy Cultural Center, Inc. which he is the founder and director. Link on to maccjazz.org to get more information about the Mount Airy Cultural Center, Inc.

There are well known musicians that came from those two programs that Tony Williams mentored and influenced. Some of them include James Lloyd, Curtis Harmon, Cedric Napolean (all from Pieces Of A Dream); Glenn Williams, Mark Mitchell, Joey DeFrancesco, Mark Henry, Leon Jordan, Leon Jordan, Jr., Duane Eubanks, Derrick Bush, Daryl Hall, Christian McBride, Pamela Williams and his son Glenn Williams just to name a few. Throughout the years, Tony and the Mount Airy Cultural Center has received a great amount of support from many volunteers and some of the surrounding areas finest musicians. Some of them include Sonny Hoxter, Tommy Grice, Joe Stevenson, Wesley Norton, Dr. Val Jennings, Don Wilson, Mark Mitchell, Mike Boone, Stan Wilson and Leon Jordan. Show less 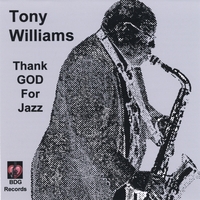 All About Jazz musician pages are maintained by musicians, publicists and trusted members like you. Interested? Tell us why you would like to improve the Tony Williams - Saxophone musician page.