The best musicians tend to display at least a bit of their roots in everything they do, and jazz guitarist Tony Do Rosario is no exception. While himself a product of the Atlantic City area of southern New Jersey, Tony's appreciation for music came at an early age growing up as a first-generation American amid a family whose native Brazilian culture was a regular part of the household. It was on family trips to Brazil that he recalls finding his love for life and music. “There was this Samba band that would rehearse down the street,” Tony reminisces. “I remember just absorbing the energy of the music.” He also enjoyed watching his grandfather, a self-taught musician, perform on the accordion for the family. Tony recalls a desire to create music of his own as early as age eight, and by age twelve, his parents had supplied him with a guitar. It was a neighbor, Tom Ferguson, however, that introduced Tony to jazz. Tom had played with legendary musicians such as Nat King Cole and Dizzy Gillespie, and Tom's stories not only enlightened Tony but inspired him to look beyond his rock and roll heroes toward jazz, where he found his true musical identity. “I love the way it makes me feel and how the music evokes emotion.”

By his late teens Tony was frequenting jazz clubs throughout Atlantic City. He began performing with local musicians at places like Rosa's Jazz Club and the Kentucky Avenue Jazz Festival. “I was just sitting in but that was okay. I saw these as opportunities to learn.”

Tony's desire to pursue jazz full-time sent him packing, and in 1993 he moved to Los Angeles. While in L.A., Tony organized jazz guitar clinics during which he had the opportunity to play with legendary artists such as Andy Summers, Pat Martino, Howard Alden, Peter Bernstein, Phil Upchurch and Ted Greene. Tony's perseverance, commitment and talent led to performances at some of L.A.'s major jazz clubs including the Baked Potato and Catalina's Bar and Grill. Tony has also been featured in John Pisano’s “Guitar Night,” a series of weekly shows for top L.A. guitar players. Pisano remarks, “Tony is one of the most promising young jazz guitarists on the L.A. jazz scene today.” “ The L.A. Times Jazz Review concurred, describing Tony as “... a hard-core traditionalist, solidly tapped into his roots in the styles of guitarists such as Jim Hall and Joe Pass.”

Tony's résumé also includes performances at New York's world-famous Birdland, Chris’s Jazz Café in Philadelphia, Fascing in Stockholm and an LA concert series billed as “Tony do Rosario and His Six-String Friends,” during which he shared the stage with the likes of Ron Echete, Jimmy Bruno, John Pisano, Paul Bollenback, Mundell Lowe, Jack Wilkins and Howard Alden. In 2007, Tony relocated to the “third coast,” Chicago. where he headlines at jazz venues such as The Jazz Showcase, Space, Pops for Champaign, Andy’s Jazz club and teaches at The Old Town School of Folk Music. In just his first year as a guitar instructor at the OTS, Tony has made his encyclopedic knowledge of the fingerboard an essential element of the guitar program. Though his emphasis is on a strong theoretical foundation to playing the guitar, his student body is not strictly limited to the jazzophile or the technical specialist. Rather, Tony imparts the tools anyone needs to understand why the music he or she loves and aspires to play works the way it does, so that the student can more effectively express himself or herself. Tony's classes and private lessons cover a basic introduction to jazz guitar, including harmonizing major and minor scales, chord melodies, and common chord changes, as well as a wildly popular course on his own complete solo guitar transcriptions of the classic Miles Davis album “Kind of Blue.” More advanced students cover arranging and soloing. Even Tony's colleagues benefit from his knowledge; his class roster often includes a few OTS guitar teachers.

In January 2008 Tony released his first CD, “The Welcoming,” on Philadelphia’s independent jazz label, Dreambox Media. This past February saw the release of, “New Beginnings,” a new CD for the jazz-by-subscription label “Chicago Sessions.” The group for the recording, Tony’s New Chicago Jazz Quartet, features Origin recording artist Geof Bradfield on sax, Nathan Kawaller on bass, and drummer Greg Wyser-Pratt. Tony continues to perform in Chicago and throughout the world. Show less

Read more articles
”Among the very best jazz guitarists of the current generation who play in traditional style, be sure to add the name of Tony Do Rosario.” -(Brad Walseth)JazzChicago.net 2008

“Tony's new CD 'The Welcoming' is a gem. I was more than a little impressed with this recording.” -(Doc Dosco) Guitarsite.com What's hot with jazz guitar 2008

“Playing a fast-fingered,straight-ahead style, he is a hard-core traditionalist, solidly tapped into his roots in the styles of guitarist such as Jim Hall and Joe Pass.” The L.A. Times Jazz Review-(Don Heckman)

“Do Rosario brings the best of both worlds to his music, as he's firmly versed in the history of jazz but brings a modern element to his shows” (Scott Semet), At the Shore, The Press of Atlantic City 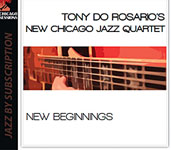 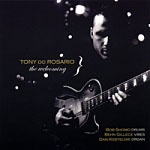 All About Jazz musician pages are maintained by musicians, publicists and trusted members like you. Interested? Tell us why you would like to improve the Tony do Rosario musician page.