Tomaž Hostnik (1992) is the author of more than seventy compositions, including whole opuses with music bands Pigs Love Pork, Drajnarjuva Vampa, Hostnik pa Krečič, Vudlenderji, music for kids, films, theatre, etc. He visited the Anton Bruckner Private University for Music, Drama and Dance in Linz, where he graduated with honours in March 2018, receiving a Master’s Degree in Piano Performance. He received first place at the 14th International Songwriting Competition (Kantfest), his song “Irena” received the most telephone votes on the 39th MMS festival (Melodie del Mare e del Sole), and he received the first award for the best lyrics at the Slovenian Song Festival 2019. He won the competition for the best juvenile drama “Južnoslovanska čitanka” (South-Slavic Textbook). As a pianist, he twice won the golden plaquette at the national competition TEMSIG. His scholastic achievements include the publishing of his Batchelor thesis by the German publisher AkademikerVerlag. All of his albums were met with positive reviews and raised a lot of attention, especially from Slovenian music critics. As a pianist, poet and chanson writer, he regularly holds concerts all across Europe.

Link to the music: https://www.youtube.com/watch?v=ERd3lPsZ7OI

Despite its brevity, the album offers quite a bit of explosive material that will, hopefully, resonate beyond the waves of alternative media.(Mario Batelić) 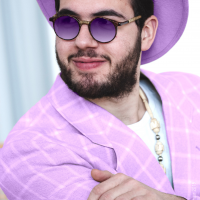 All About Jazz musician pages are maintained by musicians, publicists and trusted members like you. Interested? Tell us why you would like to improve the Tomaž Hostnik musician page.