Tómas R. Einarsson is an Icelandic composer and double bass player who has been prominent in the Icelandic jazz scene since the early nineties. Much of his later work is influenced by Cuban jazz music.

In 2014 he was granted the Order of the Falcon by the President of Iceland for his contribution to jazz and culture.

Tómas was born in the town Blönduós in the north of Iceland and grew up in Dalabyggð. He studied at Hamrahlid College in Reykjavík and was at the time a radical socialist who often took part in demonstrations. He began playing the double bass during his time studying history and Spanish at the University of Iceland. His first composition on record appeared in 1982 with the jazz group Nýja kompaníið on the album Þegar kvölda tekur.

In 1992 he formed the band Reykjavík Jazz Quartet with the saxophonist Sigurður Flosason. The group was popular in the nineties and performed around Europe. He also toured and made albums with the Ólafur Stephensen Trio.

In 2015 he released an album with Sigríður Thorlacius, the singer from the pop group Hjaltalín.

The majority of Tómas' compositions have appeared on his own records, but they may be found on over 20 albums by other artists. He has been a sideman on recordings with several well-known Icelandic artists, including folk singer Megas, rock artist Bubbi Morthens, and indie artist Mugison.

Tómas' first latin jazz record came out in 2002. The Cuban-influenced recordings became popular in Iceland and he toured extensively with his latin group around Europe and America. A techno remix of the albums was made in 2007, RommTommTechno, produced by President Bongo from the Icelandic electro-group GusGus.

A documentary about Tómas was made in 2015 under the title Latin Viking (Latínbóndinn). The biographical film followed Tómas around as he toured in Cuba, as well as his home town. The film was moderately well received and was described as having an impactful narrative.

Tómas' music can be found in a total of 13 movies and TV films. 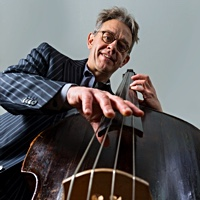 All About Jazz musician pages are maintained by musicians, publicists and trusted members like you. Interested? Tell us why you would like to improve the Tómas R. Einarsson musician page.