Thomas Guei was born and grew up in Cote d’ivoire. He is the son of an artist family (musicians and dancers). His primary interest in drums made him attend very early the best art school in Cote d’Ivoire, EDEC (School of Dance and Cultural Exchange). He became the lead drummer, then the artistic director of Les Guirivoires Dance Company, founded and directed by Rose Marie Guiraud. He has gained international acclaim. His strenuous work led him to France, where he was the lead drummer for the following companies : Georges Momboye, Merlin Nyakam and Serge Dupont- Tsakap. He recorded for many well-known musicians (Tiken Jah Fakoly, Meiway). He was also the co-composer of the French movie “Bronx-Barbes”, by Eliane Delatour, rewarded with a special mention award at the Locarno International Film Festival 2000. Thomas is involved in many artistic creations such like Setho, an afro tandem of theatrical dances and drums. He founded the bands Sounan and Les mains enchantées. In the field of classical music, he collaborated with French violinist Virginia Robillard and worked with jazz vocalist Christina Goh. Thomas Guei is today a reference in the domain of percussion. He travels all over the world (Japan, Korea, Mexico, Poland) to transmit his art.

Thomas Guei percussion
Guelassemou Album The first album of the master percussionist Thomas Guei. Originally from an artist family, especially Gloe drummers (aka krin, name used in Guinea, or aka lokole in Congo), Thomas Guei had in mind to compose a mix from djembe and gloe. Thoses two musical instruments are his trademark. GUELASSEMOU is an anthology which emphasizes traditional (flaly, abodan, tématé) and urban rhythms (zouglou) of Côte d’Ivoire. 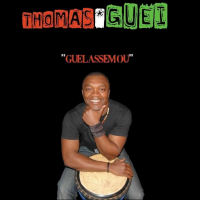 All About Jazz musician pages are maintained by musicians, publicists and trusted members like you. Interested? Tell us why you would like to improve the Thomas Guei musician page.