At eighteen years old, Suzy met “Stormin’ Norman” Zamcheck, a Yale graduate in literature and “damn good boogie woogie piano player”. Partnering with Stormin' Norman, she cut two albums with him (Fantasy Rag, 1975 and Ocean of Love, 1978) and toured the east coast for 12 years. In 1976, the great jazz pianist and composer Eubie Blake paid Suzy an inspiring compliment in the form of a handwritten letter, “I heard alot of white women try to imitate negroid singing, but you are the only one who has it down pat.” In Pittsfield, Massachusetts, Suzy married Bill Burnett in 1977. After ten years of marriage, they decided to form “The Boners”. Bill, who wrote a song that is in Bette Midler’s new Las Vegas show, has a great knack for harmony arrangements.

They looked for a new jump start to their music and enlisted Kahlil Sabbagh on vocals, vibes and percussion” as well as his wife Ginger Smith, who sings harmonies and plays tambourine. They all thought it would be great for the group to sing Mamas and the Papas as well as original songs. They eventually renamed themselves the Backboners.

The Backboners (Suzy Williams, Bill Burnett, Kahlil Sabbagh and Ginger Smith) play original songs by Bill Burnett inspired by great vocal groups like The Mamas & The Papas, as well as some exciting covers. The Backboners' fresh harmonies and stellar arrangements reinvent the summer of love magic. With recent live performances from Santa Monica, California to Swans Island, Maine, The Backboners retrieve the spirit of inspired and inspiring music many grew up with. The group recorded two albums, Spine (2005) and We Dreamed It All (2009).

Although the Backboners have enjoyed great success, the Solid Senders is the group that gives Suzy her voice. According to Suzy, “The Solid Senders came about because a trumpet player friend of mine, Barry Anthony, said, in passing, that he didn’t have any gigs. I thought ‘That’s a shame! I should create work for him and his ilk.’ Then our friend Robin Carter wanted a horn band for her going away party. Voila! Suzy and her Solid Senders.” Suzy’s pianist and longtime “vaudeville pard”, Brad Kay, came up with the name “Senders” being the hipsters of the late forties. Dan Weinstein, Brad’s friend who plays trombone, offered to arrange music for the group, while vibes/percussion master Kahlil Sabbagh from the Backboners became the musical director. And what did Suzy do? “I began furiously writing songs for the group!” she laughed.

Suzy writes music and performs with her bands or solo in venues such as Dannys in Venice, Angels in Santa Monica, the UnUrban Coffee House, the Santa Monica Farmer’s Market, and The Talking Stick in Venice. She and her husband/agent Gerry Fialka also work with Venice’s well-established literary venue, Beyond Baroque, to produce annually “The ‘Lit’ Show: Songs by Literary Lions”. At this event, Suzy performs songs written by classic authors like Dorothy Parker and Tennessee Williams, and puts her own music to excerpts from classic poems and novels. From a dancing lobster in Alice in Wonderland to Lolita’s Humbert Humbert, Suzy has resurrected some of the stranger characters of literature through her music. Show less

Suzy Williams is a very talented singer with a wide range who knows how to put on an entertaining and witty show. She can sing anything from 1920's jazz and swing to blues, rock & roll and folk music. Williams' highly expressive and witty vocals are always worth hearing.
- Scott Yanow, LA Jazz Scene 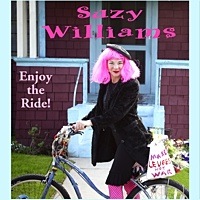 All About Jazz musician pages are maintained by musicians, publicists and trusted members like you. Interested? Tell us why you would like to improve the Suzy Williams musician page.