Steven Vibert Pouchie was born and raised in New York City, where he attended and graduated from Manhattan’s Stuyvesant High School. He received a full scholarship to Bard College in upstate New York, where he met teacher and Jazz trombonist Roswell Rudd, who inspired him to study music and become a vibraphonist. He graduated with a Bachelors Degree in Economics and an Associate Degree in Music

Steve worked in corporate sales for a time but soon became a NYC Music teacher in 1993 working at Walton High School. In 2004, Steve was awarded the distinguished New York Post Liberty Medal at Gracie Mansion for his outstanding and innovative work as an educator. According to New York City’s Mayor Michael Bloomberg, who presented Steve with his meda , “These men and women have made important contributions to their community through time, work, talent and wisdom.”

Despite the demands of being an educator, Steve, always eager to play with his ensemble, continued to develop musically by performing at colleges, restaurants, night clubs, political events and outdoor concerts. He has played with or opened for an array of established musicians, including Tito Puente, Charlie Palmieri, Jimmy Sabater, Dave Valentin, Bobby Sanabria,and many others.

In 2002 Steve released his first CD “Vibe Mania” which included a compilation of latin vibes classics such as “Philadelphia Mambo”, “Alonzo”, “Para Ti” and other standards. In 2010 however Steve’s second CD “El Puente” (The Bridge) was released and has received acclaim as a new definitive musical work for vibraphone. The recording features a variety of classic compositions as well as new, original material. But more importantly, it reflected Steve’s growth as a leader, musician, composer, arranger and producer. With a style comparable to Cal Tjader and Tito Puente on vibes, Steve has developed a style of playing that is unique and exhilarating to watch and listen to. Steve’s new CD, “North by Northeast” (January 2015) presents up tempo danceable Latin Jazz arrangements and compositions and features Grammy nominated Wilson “Chembo” Corniel on congas and percussion. It is already receiving critical acclaim as new benchmark for Vibes players both in Jazz and Latin Jazz genres.

This album, North by Northeast is an infinitely sophisticated recording, full of romantic allusions from literature and film. If it suggests Alfred Hitchcock, it is because it abounds in mystery and magic.

High School Music teacher in NYC Board of Ed for over 17 years. 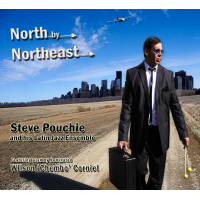 All About Jazz musician pages are maintained by musicians, publicists and trusted members like you. Interested? Tell us why you would like to improve the Steve Pouchie musician page.