Steve Kimock has proved himself a master of fluid improvisation for over four decades, in the process inspiring music fans with his transcendent guitar speak voiced through electric, acoustic, lap and pedal steel guitars.  With his multi-decade reputation as a blazing psychedelic guitarist versatile enough to touch almost all aspects of American music, Steve Kimock continues to evolve creatively as illustrated in his last two critically acclaimed records, a romantic pop collaboration in Satellite City and an experimental solo effort in Last Danger of Frost.

While one can say that his genre is rock, no one niche has ever confined him. Instead, through the years, he’s explored various sounds and styles based on what’s moved him at the time, whether it’s blues or jazz; funk or folk; psychedelic or boogie; gypsy or prog-rock; traditional American or world fusion

Threaded through this expansive and highly nuanced musical landscape is Kimock’s signature sound, the prodigious product of his ability to articulate crystal-clear tone, melody and emotion into intricately woven music crafted with technical brilliance. His passion and devotion to performing live is matchless, and his unparalleled ability to embrace and capture his audiences musically is the stuff of legend.

Kimock co-founded the jazz/rock band Zero in the ‘80s and KVHW in the ‘90s; since then, he has recorded and toured in various outfits under his own name. His collaborations with assorted band mates and groups have provided an everlasting wellspring of inspiration for the guitarist, and he has shared the stage with a seemingly endless array of international musical luminaries. After more than 40 years on stage, Kimock is more committed than ever to a jubilant spirit of musical diversity — the same spirit that has fed his desire to pursue an authentic relationship with the guitar since the day he realized his calling.

Born and raised in Bethlehem, Pennsylvania, he was inspired by the instruments that filled the home of his folk-singing aunt, Dorothy Siftar. Then a cousin showed him some licks on a beautiful Gold Top Les Paul. Soon Steve got his own guitar, a $10 acoustic that he began playing 12 hours a day, every day.  He’s still at it.

After playing in a series of high school bands, Kimock moved to northern California in 1974. His first home was directly behind the Ali Akbar Khan School of Music, and every morning he awoke to the sound of sarods and sitars, sparking his interest in the music of other cultures that colors his own compositions to this day. After being part of various bands, including the short-lived Heart of Gold Band with former Grateful Dead members Keith and Donna Godchaux and drummer Greg Anton, in 1984 he and Anton co-founded Zero, an instrumental psychedelic jazz/rock/blues band that also saxman Martin Fierro, bassist Bobby Vega, keyboardist Pete Sears (who was eventually succeeded by Chip Roland), and former Quicksilver Messenger Service guitarist John Cipollina. It was during the Zero era that Kimock would define his fluid style of melodious improvisation.  By 1992, Zero was regarded as one of the marquee Bay Area bands and architects of the infant jam band genre.

While still performing with Zero, Kimock began to explore new terrain with the looser, bluesier Steve Kimock & Friends, an ever-evolving project that continues to feature a cast of acclaimed singer- songwriters, Hammond B-3 players, rock guitarists and numerous other serious players Kimock has befriended along the way.  Late in the century it was succeeded by KVHW, a much lauded though short-lived quartet comprised of himself, Zero bassist Vega, drummer Alan Hertz, and former Frank Zappa sideman Ray White. In February 2000, KVHW morphed into the Steve Kimock Band, which featured Kimock and Vega along with a rotating crew of guitarists and drummers. In 2009, he formed the upbeat, gospel-influenced, soul-rock band Steve Kimock Crazy Engine, which featured legendary Hammond B3 player Melvin Seals and Kimock’s son, John Morgan Kimock, on drums.

In 2015, Steve holed up in a barn/studio for a winter with an engineer and a fair number of acoustic guitars.  The retreat yielded Last Danger of Frost, an introspective and brilliant CD.  He organized the band KIMOCK (Steve, Bobby Vega on bass, John Morgan Kimock on drums, Leslie Mendelson on vocals and various instruments) to perform that music.  As they played, their creative juices began to flow, and soon they (Steve, John Morgan, and Leslie) were writing new songs. The end result, Satellite City, was released in October 2017, and voted one of the best albums of 2017 by Glide Magazine.  Since then, Steve and John Kimock have continued to produce music, releasing Invocations I in February 2019.

Jacob Fred Jazz Odyssey with Steve Kimock at the World Cafe Live on... 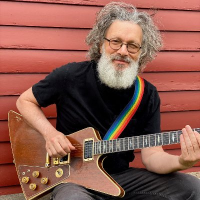 All About Jazz musician pages are maintained by musicians, publicists and trusted members like you. Interested? Tell us why you would like to improve the Steve Kimock musician page.