Søren Lee (Born January 20, 1966 in Copenhagen) is a Danish Jazz guitarist and composer. He started playing guitar at age of 10, took guitar lessons for about two years with a private teacher and began his professional career at 15. He performed with his own band in smaller places around Copenhagen. At 16 he started playing with the funk band “Tonight” that Achieved big success around Denmark played around 4 gigs a week in two years. At 19 he started playing with the Jazz group Orbits with Uffe Markussen sax, Alex Riel (Drums) Ben Besiakow (piano) Marilyn Mazur (perc.) among others, and got his first review as a jazz guitarist with this band in the newspaper Politiken after playing in Jazz club Montmartre headline was “Great talent, Danish guitar hope”. (By Boris Rabinowich).

In summer 1988-90 Søren packed his bags and went for the big Apple New York to try it out and also to study music at New School for jazz and social research.

Søren Lee performed in 1991 with Jim Hall quartet at Village Vanguard New York, and was also feat. with Jim hall quartet at Montmartre the same year.

In 1992 he recorded his second solo Album Søren Lee Trio with Adam Nussbaum on Drums and Jesper Lundgaard on bass. This trio album received many great reviews: “Briliant guitar talent Søren Lee is a formidable guitarist nothing less. (Jyllands Posten)”. This trio toured all over Scandinavia.

Portrait of Søren Lee as a guitar player in 1994 Danish TV,

Back in N.Y. in 1997 to study classical composing for a year at City College, playing two/three gigs a week in New York.

In 1999- he starts playing as a sideman on tours and albums with many different artists in Denmark to name a few Cæsilie Nordby (two month tour in Scandinavia), drummer Jonas Johansens “Please Move” that was nominated for an Danish Grammy, saxophonist Emil Hess in different constellations, pianist Jørgen Emborg, this year he also starts teaching guitar at MGK and different Conservatoriums in Denmark.

In 2005 he gets curious about singing and the human voice and he goes to Los Angeles “Hollywood” 2007-2009 to study vocal technic with the legendary vocal coach Seth Riggs known from being coaching Michael Jackson, Stevie wonder among many others, 2007-2016 Søren writes more than 100 songs with lyrics. From 2009-2017 he opens a vocal studio in Copenhagen getting a lot of success as a vocal teacher by teaching pop stars from the radio (Jannik) from Nic and Jay - Vinnie Who among many others, in this period he is also playing around with his own bands and as a sideman for other artists.

In 2016 he starts his collaboration with the Swedish/Italian drummer Niclas Campagnol and it inspired him to a new recording and his fourth album “Søren Lee Diversity Trio” together with the Mauritian bass player Linley Marthe (known from from playing with Zawinul Syndicate the last 5 years of Joe Zawinul´s life and from playing today with drummer Omar Harkim´s band) and it´s Niclas Campagnol on Drums. The album "Søren Lee Diversity Trio" was released sept. 7th 2018 with a concert in Jazzhus Montmartre in Copenhagen. Show less

​”The music reached it’s max, when Søren got down to business, all aesthetic considerations were ignored, and the music turned into flesh and blood…” [Politiken). Boris Rabinowitch]

Sit down and carefully listen to Lee who treats his instrument so sensitive, swinging, dangerous and ongoing, like a dream. [Peter Nørgaard Extra Bladet]

​”The music reached it’s max, when Søren got down to business, all aesthetic considerations were ignored, and the music turned into flesh and blood…” [Politiken). Boris Rabinowitch]

Sit down and carefully listen to Lee who treats his instrument so sensitive, swinging, dangerous and ongoing, like a dream. [Peter Nørgaard Extra Bladet] 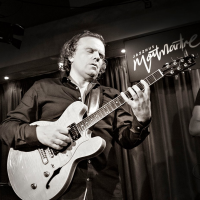 All About Jazz musician pages are maintained by musicians, publicists and trusted members like you. Interested? Tell us why you would like to improve the Søren Lee musician page.