Juan Garcia-Herreros, also known by his stage name “Snow Owl”, is a world- renowned electric bassist. With his special instrument, a six-string Contra Bass Guitar, he has performed with world famous stars - including several Grammy award winners and nominees ( Elton John, Al Jarreau, Spanish Harlem Orchestra and Christina Aguilera ). For his own music, he has been honored with numerous prestigious awards. His work and virtuosity with the Contra Bass Guitar has been received with the highest recognition from international bass and music publications.

2006 Snow Owl Debut CD is selected as a Critic's Choice in Germany by the Bayerischer Rundfunk.

2009 He was selected as a Projekt xchange ambassador to represent Colombia and his integration as an artist in Austrian society. Projekt xchange focuses in bringing foreign and established public figures into Austrian classrooms to talk about their positive and negative experiences of integrating in a foreign country. The Austrian president Dr.Heinz Fischer personally thanked and congratulated him in the opening ceremonies which took place in Vienna's Hofburg palace.

2013 Selected by Bass Musician Magazine as #6 in the all time best Latin Bass Cd's ever covered by the publication.

”From the very opening notes of Colombia native Juan García-Herreros’s sophomore effort—an improvised solo piece entitled “A Step Towards Vision”— you can tell you’re in for something special. The Art of Contrabass Guitar isn’t just an intended hat tip to Anthony Jackson; it’s a true “statement album” that shows how Berklee standout and current New Yorker García- Herreros (who sometimes goes by the moniker “Snow Owl”) has firmly landed as both a dead serious 6-string bassist and modern jazz composer” - Bryan Beller (Bass Player Magazine)

”I tend not to throw around the word “virtuoso” lightly, but Juan’s playing in every sense has in my opinion earned that status.” - Jake Kot (Bass Musician Magazine)

”If there exists an heir of Jaco Pastorius, Juan Garcia‐Herreros could be it” - Alfred Krondraf (Concerto Magazine)

An on hands and tactical approach to improvising and commanding your instrument. 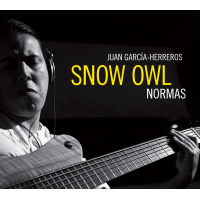 All About Jazz musician pages are maintained by musicians, publicists and trusted members like you. Interested? Tell us why you would like to improve the Snow Owl musician page.