Bray is a well respected jazz guitarist, composer and educator who has played with various artists on many diverse projects. While in New York, Bray studied at the prestigious ManhattanSchool of Music. Bray has played with and/or recorded with George Garzone, Pat LaBarbera, Bob Mintzer, Jon Faddis, Liberty Silver, Matt "Guitar" Murphy from the Blues Brothers, Mike Murley and Vincent Wolfe. Bray has taught at The University of Guelph and the Toronto Film School. According to jazz guitar legend John Abercrombie, "Sean Bray is a real treat to listen to". CBC Radio named Bray one of Canada’s top 50 greatest guitarists of all time. He is also a member of the popular Celtic fusion band Cod Gone Wild and Songs of the Southern Belles. Bray is endorsed by PRS guitars, D’addario and Planet Waves 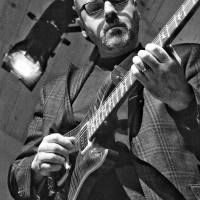 All About Jazz musician pages are maintained by musicians, publicists and trusted members like you. Interested? Tell us why you would like to improve the Julian Lage musician page.