Sara Yervand (former Erzinkian) was born in Armenia, and began to sing jazz, pop and Armenian folk music at the age of 15.

She made many stage performances in Armenia, European countries, including Paris (live appearance on a TV show “Sacree Soiree”) Vienna (where she lived for 3 years), Montreal, Zagreb (Yugoslavia) and others.

Her recordings with National Pop-Symphonic Orchestra of TV and Radio of Armenia under direction of conductor and composer Yervand Yerznkyan are outstanding. In May of 2005, Sara produced and released her first album “Introducing Sara Yervand,” which was followed with a CD release party at the “The Bar” of Concourse Hotel, th performance at the Isthmus Jazz Festival in June, and coming up performance at the Jazz @5 festival in August.

She lives, works and sings jazz professionally in Madison, WI. She teaches at Madison School of Music and sings at Jazz Festivals and regional events. “ 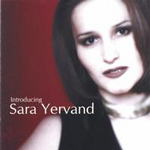 All About Jazz musician pages are maintained by musicians, publicists and trusted members like you. Interested? Tell us why you would like to improve the Sara Yervand musician page.