Samuel Martinelli is a drummer, composer and educator based in New York City.

In 2014 moved to New York City to attend the City University of New York - Queens College for the Master Program of Jazz Studies, where he had the opportunity to study with the great musician Dennis Mackrel.

Performed in major venues such Stern Auditorium Carnegie Hall in New York City, LeFrak Hall NYC, Shangai Jazz Club, Zinc Bar NYC, Jazz Forum, DownTown Westfield Jazz Festival, Monmouth Library Jazz Series, RockWood Music Hall, among other music venues in US and Brazil. ​​​​​​​​​​​ His last project is the production of his first album called Crossing Paths, which features the multi-Grammy nominated Claudio Roditi on trumpet, Marcus McLaurine on bass and Tomoko Ohno on piano. The album is in process of final production and will be released in 2018.​

Samuel also works regularly in other projects. One of them is the “Tres Urbanos” group, composed by the great Brazilian bass player Itaiguara Brandao and the guitar player Wesley Amorim.

Read more articles
​​”I have performed and recorded “Harlem” (Duke Ellington) with master drummers and Samuel's mastery and interpretation was easily in their league.”​ Maestro Maurice Peress

“A versitile player, groovy, yet subtle and intriguing and never too loud - the perfect drummer for a singer.” Misha Steinhauer 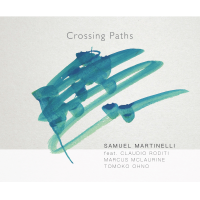 All About Jazz musician pages are maintained by musicians, publicists and trusted members like you. Interested? Tell us why you would like to improve the Samuel Martinelli musician page.