At 23 years old, composer, arranger, orchestrator, bandleader, musical director, producer, and saxophonist, SamsonTrinh has had a lot on his plate! Born in Richmond, Virginia on May 8th, 1983, Samson received a Merit Scholarship to attend the Berklee College of Music's Summer Program and several Merit Scholarships from Virginia Commonwealth University where he has earned his B.M. in Jazz Studies.

At VCU, he studied composition and jazz arranging with Doug Richards (founder of the school’s jazz program) and saxophone with Skip Gailes, John Winn, and principal New York Philharmonic saxophonist, Albert Regni. In 2005, he was the winner of Richmond Jazz Society's prestigious Joe Kennedy, Jr. Scholarship. Samson is an alumnus at New York's Manhattan School of Music where he studied jazz composition with well-known composer, Michael Abene.

. The organization is made up with the finest young musicians in the capital of Virginia. Their repertoire features the swingin’ big band sounds of Duke Ellington, Count Basie, Benny Goodman, and Glenn Miller. The Upper East Side Big Band’s vocalist and pianist, Adrian Duke, will also blow listeners away as he croons popular standards from the Frank Sinatra and Ray Charles songbook. In 2005, the band opened up for Kool & The Gang at Richmond, VA's Jazz on the James. Show less 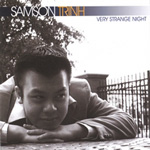 All About Jazz musician pages are maintained by musicians, publicists and trusted members like you. Interested? Tell us why you would like to improve the Samson Trinh musician page.