Forming in 2015, Safety Squad started as a ten piece Snarky Puppy cover band, and over the last four years the personnel and sound has changed drastically. Now Safety Squad rocks a five-to-seven piece outfit and plays original music by bandleader and composer Danny Bauer. With 2 albums available online and a third to be released by the end of 2019, Safety Squad is a force in the modern jazz world to be reckoned with. The Squad plays a genre of music they call Adventure Jazz - a dynamic blend of jazz, funk, rock, video game music and everything in-between. Watch out for the Safety Squad national tour to happen in 2020

Safety Squad synthesizer
”Watching Safety Squad onstage was a unique experience. The performance left the crowd, myself included, begging for more. This prompted them to deliver an absolutely electrifying encore performance. I think everyone went home happy and musically fulfilled after that.” - Weird Music Concert Review ​ ”Into The Danger Zone is six monstrous tracks that are highly recommended for modern jazz and groove fans, especially fans of band favorites like Snarky Puppy and Vulfpeck, and anyone that enjoys masterfully-played tunes with adventurous twists and turns.” -Andrew Patton Jazz Columbus 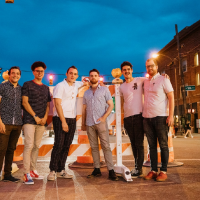 All About Jazz musician pages are maintained by musicians, publicists and trusted members like you. Interested? Tell us why you would like to improve the Safety Squad musician page.