During an era when there are many female singers who are attempting to sing jazz, Rita stands apart from the crowd. A California-based vocalist who is making quite an impact on the Los Angeles jazz scene, she has a very appealing voice, a four-octave range, and is able to express a wide variety of emotions. Rita swings at every tempo and does justice to the lyrics that she is singing but is also a classy and spontaneous improviser who is not shy to stretch herself or to take her music in unexpected directions whether interpreting up tempo swing, sensuous blues or a heartbreaking ballad. Blessed with a powerful voice, Rita started singing lead in the junior choir of her church when she was five.

At 15, she trained with the highly respected vocal teacher Evangeline Seward, one of the best in the business. Her sultry voice contributed to various producers and songwriters for BET, Warner Chappell Publishing, MCA Records, EMI Publishing and Motown. She also worked in Las Vegas and throughout Europe including Nice, Cannes, Monte Carlo (where she opened for Prince), Italy, Paris and all over the South of France.

When Rita was with the Keith Edwards Agency, she sang at private parties for Hollywood notables and, at the Beverly Hills Hotel, she opened for Cleo Laine. After performing all over the Los Angeles area during the past year, Rita recorded her debut CD, Sketches Of A Dream. “The title of the CD has a meaning and a story, “ says Rita “I am sketching out a lifetime dream of what I want to do vocally. I love jazz and the standards are some of the most beautiful songs ever written. Jazz is the most liberating free form of music there is; I call it free flowing music. You are free to be who you want to be, do what you want do and mostly sing the way you want to sing, without restrictions.

Most, of my life I have sung somewhat outside of the norm. Sketches of a Dream is the culmination of all my experiences, good and bad, and my dream to overcome it all and be true to myself, singing with a free flowing vocal style.” Joined by a quintet comprised of pianist Joel Scott, bassist James Leary, drummer Quentin Dennard, tenor- saxophonist Ricky Woodard and trumpeter Nolan Shaheed, Rita gives 16 of her favorite standards a fresh outlook with inventive interpretations that are full of plenty of excitement. Among the many highlights are a passionate “Dindi,” and “All The Way,” and joyful versions of “You’d Be So Nice To Come Home To,” “Day By Day” and “Almost Like Being In Love.” While she pays respect to the original intentions of the songwriters and lyricists, Rita also feels free to use her creativity to alter melody lines, swing hard and fully express herself so as to make each song her own.

For the future, Rita, look forward to recording more, performing at many of the jazz festivals all over the world, working with orchestras and big bands at least once in addition to singing and performing on an international level. ” It is obvious, listening to Sketches Of A Dream, Rita is on the brink of great success. Today, few are on her level. 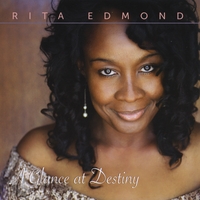 A Glance at Destiny

All About Jazz musician pages are maintained by musicians, publicists and trusted members like you. Interested? Tell us why you would like to improve the Rita Edmond musician page.